You are here: Home / Moms at Home / Health and Wellness for Moms / How to Treat Seasonal Affective Disorder

Chances are likely that you’ve heard of the term “Winter Blues” and believe it or not, this is a very real thing. Along the lines of postpartum depression; winter blues can come along once in awhile. But what about when it’s more than just winter blues?

Is it really possible to become that depressed or filled with anxiety because of something as simple as a seasonal change? In short, absolutely yes. But, this is also one of those things that people don’t like to talk about too much for whatever reasons or another.

Whether it’s because they feel embarrassed about it or they just don’t want to acknowledge it; seasonal affective disorder doesn’t get talked about as much as it should. 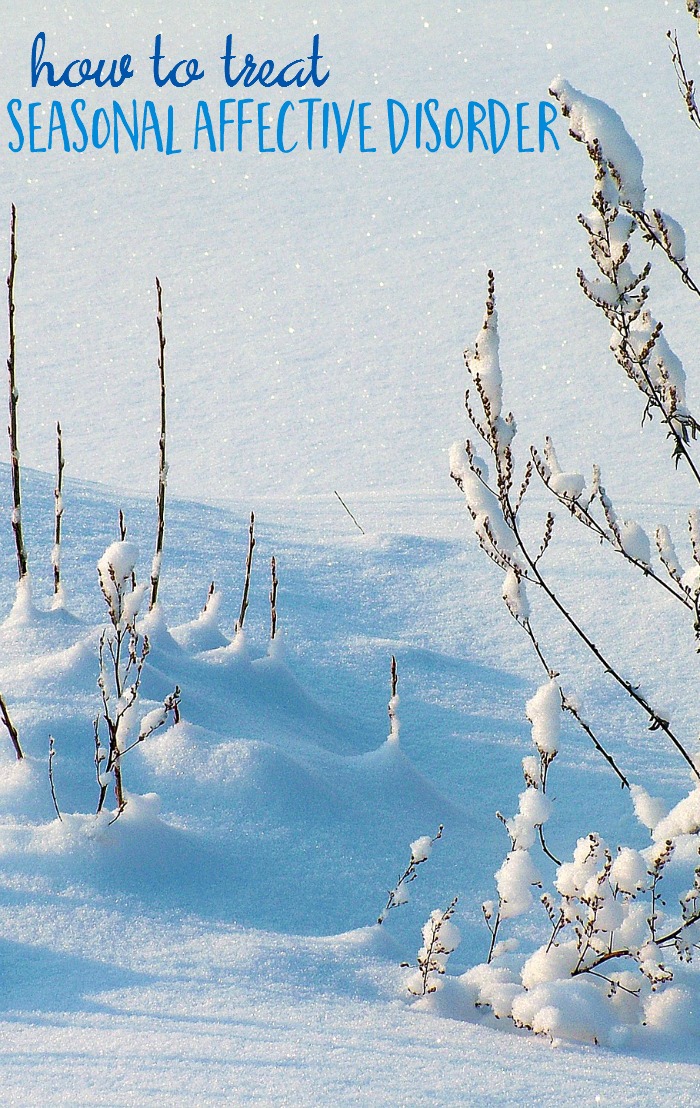 Is it the winter blues or seasonal affective disorder?

Is it just a case of the “Winter Blues”

The winter blues are just as common as SAD; however, the symptoms don’t persist.

They don’t last as long and they don’t necessarily show up like clockwork when the seasons change. The winter blues happen when a person is feeling down for a couple of days. Getting out and socializing, exercising and making a few dietary changes can alleviate the problem.

Many people experience an occasional bout of the blues. And the winter is a common time for it to creep up. The sky is dark. The air is cold. People don’t get as much fresh air and sunshine as they need.

How Do You Know If It’s the Blues or SAD?

If you’re diagnosed with SAD, there are ways to manage the condition. If it’s the winter blues, then create a plan to stay positive. Diet and exercise improve both SAD and the winter blues, so take good care of yourself.

This winter, find joy and happiness and leave depression and sadness behind!

What is Seasonal Affective Disorder?

Seasonal Affective Disorder or SAD is a kind of depression caused by the effect of the change of seasons as early as August or September in men and women and may be recognized by things as simple as eating or sleeping more during winter than the rest of the year.

The National Institute of Health realized about this disorder during the 1970s although it has existed for centuries. This entity realized about SAD after have asked people if they noticed they were eating and sleeping more over winter.

Experts and new research discovered that the best way to fight this disorder is to add cognitive behavior therapy or “talk therapy” to the mix of using anti-depressant drugs and light therapy, the traditional approaches to treat SAD.

Although there are many theories about SAD, experts highlight that production of melatonin, a sleep hormone related to depression, may increase over winter. Meanwhile, the amount of serotonin, which is a brain chemical triggered by sunlight, is thought to increase with the lack of sunlight.

Symptoms of SAD include but are not limited to:

If these symptoms persist for more than a few days and consistently return season after season, you probably have SAD. It’s important to see your doctor and get properly diagnosed.

As there is evidence that light intensity and temperature also may play a role in developing SAD the related depression can vary.  It is also known that the percentage of people with affective disorder increases with increasing latitude, as shorter days seem to trigger symptoms.

There exist several ways to treat SAD and experts think that the first approach should be light therapy. But patients with seasonal depression may respond better to treatment when the therapy is combined with medication.

Do you know someone who has dealt with seasonal affective disorder?

Previous Post: « How to Prepare for the Future While Still Planning for the Present
Next Post: How to Create a Weekly Family Cleaning Schedule »

Just wanted to say that a SAD lamp (light therapy) is also good for those with other mental health issues who get worse during winter. For example I have Bipolar but my depressions are always worse in Winter so I’m using a SAD lamp. I just have to be careful to watch my symptoms because those lamps can make me manic too if I use it too much.

Oh, I’ll have to bear that in mind! Thank you for the input.