You are here: Home / Moms at Home / Health and Wellness for Moms / How to Deal with Eczema

As a teenager, I had fairly average skin. Sensitive skin that couldn’t tolerate nickel in anything, but still fairly average. I was susceptible to the occasional acne breakout but overall, my skin was okay.

But then, my Junior year of high school, something changed.

It started with a red patch on the inside of my elbows. An itchy patch that I tried to leave alone, but just couldn’t. Then that same irritating patch appeared on the backs of my knees. Still, no big deal. I dealt with it because that’s what I had to do.

It wasn’t until my Senior year of high school, after dealing with the occasional disappearance and reappearance of the red patches, that it spread to my neck. Before I could deal with it because it wasn’t visible and because it wasn’t that noticeable.

But now, it was right where everyone else could see. And I had to do something about it. It hasn’t become too much of a problem in my adulthood, but I still wanted to share some tips and advice on how to deal with eczema. 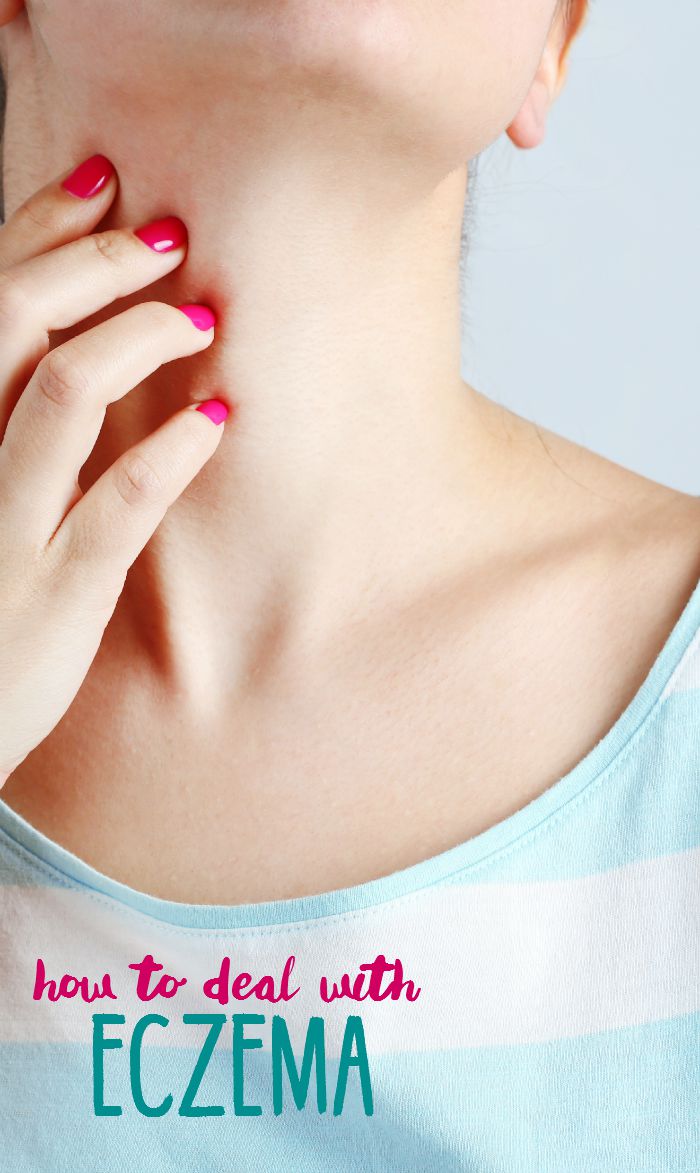 Eczema is a form of dermatitis, or inflammation of the upper layers of the skin.

The most common types of eczemas are:

* Atopic eczema (aka infantile e., flexural e., atopic dermatitis) is thought to be hereditary, and often runs in families whose members also have hay fever and asthma. Itchy rash is particularly noticeable on face and scalp, inside of elbows, behind knees, and buttocks. Experts are urging doctors to be more vigilant in weeding out cases that are in actuality irritant contact dermatitis. It is very common in developed countries, and rising.

About three fourths of contact eczema are of the irritant type, which is the most common occupational skin disease. Contact eczema is curable provided the offending substance can be avoided, and its traces removed from one’s environment.

* Xerotic eczema is dry skin that becomes so serious it turns into eczema. It worsens in dry winter weather, and limbs and trunk are most often affected. The itchy, tender skin resembles dry cracked river bed. This disorder is very common among the older population. Ichthyosis is a related disorder.

* Seborrheic dermatitis also known as cradle cap in infants and dandruff causes dry or greasy scaling of the scalp and eyebrows. Scaly pimples and red patches sometimes appear in various adjacent places. In newborns it causes a thick, yellow crusty scalp rash called cradle cap which seems related to lack of biotin, and is often curable.

Eczema diagnosis is generally based on the appearance of inflamed, itchy skin in eczema sensitive areas such as face, chest and other skin crease areas. However, given the many possible reasons for eczema flare ups, a doctor is likely to ascertain a number of other things before making a judgment.

Now, Squeaker has dealt with cradle cap since she was a newborn, so this is something that I’ll be keeping an eye on as she gets older. So far, however, it seems that she’s inherited mommy’s sensitive skin.

How to Deal with Eczema at Home

Fix Your Diet-
It’s often the change that has the biggest effect on your Eczema, and ironically is most often the easiest change to implement into your lifestyle. Scientific reports have hinted that foods with a high acidity can have direct links to Eczema.

You can fix this very efficiently by visiting a dietician and getting some ideas for a new diet-but realistically, most people have neither the means or the inclination to visit a specialist dietician, so I would suggest a trip to your local health food store. Kelp supplements can most likely be found there, and they are proven to have a very high Alkali content. This alkali will neutralize the acid in your stomach from Acidic foods, and so can be a quick way to get relief.

Moisturize-
The more you moisturize the less bother your eczema will give you, period. For most people the dreaded itching is among the worse parts of being an Eczema sufferer, and a regular moisturizing regime can really help eliminate that itch.

The best method is to moisturize each day after your bath or shower, and lightly towel yourself dry before application. Applying the moisturizer to slightly damp skin like this will help you lock some of the moisture inside the skin, giving even greater relief.

Use an emollient-
An emollient is like a moisturizer but it actually uses fat as a base. Gross huh? Be that as it may, the emollients can work wonders if you use them as a moisturizer. The fat content can actually seal the surface of your skin, keeping all the moisture inside it. This can be very good for you as it will keep your skin supple and soft, and make it less prone to flaking and itching.

You don’t need me to tell you how much of a pain Eczema can be, but hopefully if you apply some of these tips you can find some considerable relief.

Do you have eczema or know someone who does? What advice would you offer on how to deal with eczema?