Sweet B’s social worker at school once told me that in her adapted PE class, they do a lot of free movement and play. Since Sweet B has not received physical therapy in quite some time, the main physical activity that she gets at school is through adapted PE. I’ll often get notes from her teacher through her notebook that she’s enjoyed a particular activity. Dancing, for example, is one of her favorites. They’ve also done yoga in the past. But is yoga beneficial for autistic children? Absolutely. Here are a few that you can try.

April is National Autism Awareness Month, and yoga is proving to have many benefits for children on the autism spectrum. For instance, a recent study found that elementary school kids with autism spectrum disorder who participated in a daily yoga program had reduced aggressive behavior, social withdrawal, and hyperactivity.

Autism is a developmental disorder that typically appears in the first three years of life; whether mild or severe, autism spectrum disorders nevertheless interfere with a child’s ability to communicate and understand social cues. This causes anxiety, obsessive behavior, and difficulty managing emotions.

Children with autism who practice yoga begin to feel more calm and comfortable in their bodies. As a result, they experience less anxiety and it becomes easier for them to control their behavior and emotions

As well as some of the benefits typically associated with yoga such as improved strength, concentration, and flexibility, there are 3 additional benefits for kids with autism.

Children with autism are visually oriented, so colorful pictures depicting how to do yoga poses can be very helpful. The capability to understand ones actions and imitate those actions are directly correlated to the development of social-communication skills.

The following three yoga poses focus on breath and movement. Breathing in and out through the nose while practicing yoga helps to calm the nervous system and also enhances self-regulation. The Inhale pose encourages children to utilize this deep breathing technique. “One of the most important parts/of any yoga pose/Is remembering to breathe deeply/By inhaling through the nose.” 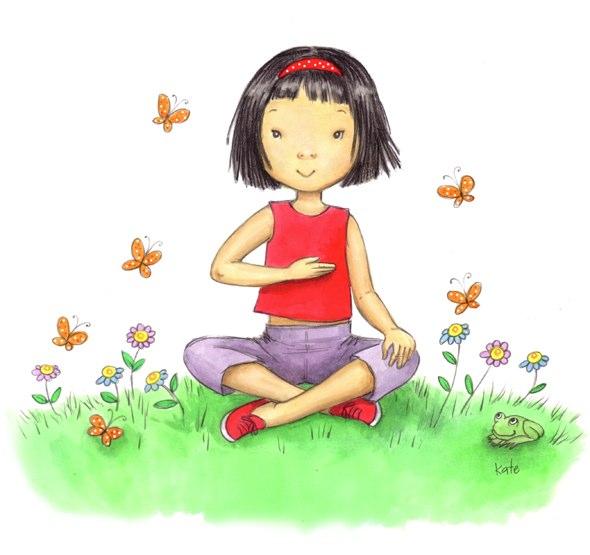 Besides focusing on the breath, yoga also encourages movement which improves motor planning, balance, coordination, strength and flexibility.  The Flamingo pose is a great yoga posture for children with autism to practice. It takes a lot of effort to balance on one leg, and once this pose is mastered a sense of self-confidence exudes from children. This feeling of self-assurance flows into other areas of their lives as well. 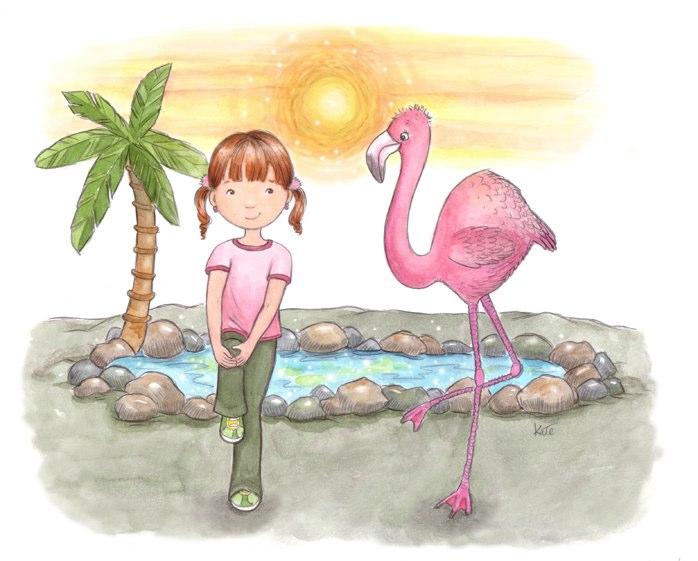 Another fun pose for children on the autism spectrum to try is Dog pose. This posture stretches the hamstrings, calves, and arches while it opens the shoulders and chest, and also tones the abdominal muscles. Kids can even bark like dogs while holding this posture. 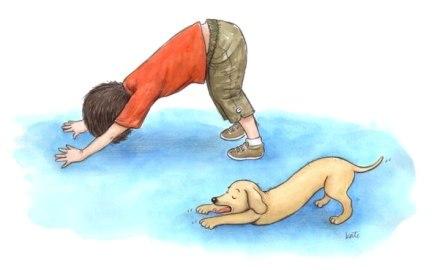 In sum, yoga can help to decrease anxiety, improve concentration, and regulate self-control; it also helps children with autism gain new motor, communication, and social skills. The end result is an overall improvement in their quality of life.

Teresa Anne Power is an internationally recognized children’s yoga expert and best-selling author of the award-winning books The ABCs of Yoga for Kids and The ABCs of Yoga for Kids: A Guide for Parents and Teachers. She has taught yoga to kids for over 10 years, helping thousands of children develop a healthy attitude towards their body. Teresa has also appeared on local and national TV and radio talking about the health benefit of yoga for kids, and is a keynote speaker. In addition, she is the founder of Kids’ Yoga Day, an international event to raise global awareness of the benefits of yoga for kids.

Digital Product Creator at Kori at Home
Kori is a late diagnosed autistic/ADHD mom. She is currently located in Albany, NY where she is raising a neurodiverse family. Her older daughter is non-speaking autistic (and also has ADHD and Anxiety) and her youngest daughter is HSP/Gifted. A blogger, podcaster, writer, product creator, and coach; Kori shares autism family life- the highs, lows, messy, and real. Kori brings her own life experiences as an autistic woman combined with her adventures in momming to bring you the day-to-day of her life at home. Kori is on a mission to empower moms of autistic children to make informed parenting decisions with confidence and conviction.

Are you planning out your summer vacation or weekend getaways for your family? Have you thought about taking a camping trip? If you are hesitant about this, I would encourage you to check out these essential tips for camping with autistic children. Perfect for your first time or even if you’re looking to get your feet wet a little with backyard camping.  Why You Should Go Camping with Your Autistic Child Camping is such a fun family activity. I have a lot of fond memories, and some not so much. Camping is one of those things that I would love to do with my autistic daughter. I think that she would enjoy it, and given the right amount of planning? It could be one of our most…

While I could have done this post about occupational therapy, I’m going to save that for another post. Instead, O is for Overload as we continue with our Autism A to Z series. When I say overload, I actually mean sensory overload. We’ll also talk about occupational therapy in brief but it will definitely be covered more when we get to the letter T. So just what is sensory overload? Sensory overload happens when the brain gets overstimulated by the environment. Contributing factors could be: noises, smells, lights, too many people, texture of clothing, etc. It could really be any number of things. After awhile it just becomes too much for the brain to process. Too much sensory overload or sensory stimulation could lead to…

When most parents are starting on the autism diagnosis process, one of the first things they ask: Did vaccines cause autism? Maybe they’ve read an article or it was word of mouth.  But why the doubts? Why are parents concerned about this? Well, for starters, the rate of autism diagnosis has increased year-after-year.  This tends to cause a bit of worry and concern. And rightfully so. Parents start looking for a cause. Do vaccines really cause autism? When I first started blogging about autism, I told myself that I would never touch the vaccine topic. Why? I always felt that it was more trouble than it was worth. However, with Autism A to Z, I felt that I would have a great opportunity to cover the topic…

If you are a new parent to the world of autism spectrum disorder, let me be among the first to bid you welcome. This diagnosis is not an easy one to deal with at first but it will get better. It may not seem like it right now, but in time, you’ll start seeing some bright spots. If you need it, take a moment and read some of these encouraging quotes for autism moms. I’m not suggesting that you go out and celebrate your child’s newfound diagnosis, but for right now- take a deep breath, count to ten, have some coffee (with some Bailey’s if you need it), and relax. You’ve got this. My daughter was diagnosed in 2004 and one of the first things…

With all of the concern, and naturally so, about COVID-19, I wanted to share a few quick tips in case you find yourself in a state where they are enforcing a quarantine or if you’re self-quarantining for safety precautions. Really we don’t go a lot of places anyway, but here’s what I would recommend. How to Prepare for a Quarantine with an Autistic Child First things first, stock up on your necessities. This is common sense though so don’t go too overboard. But try to give yourself a little bit of a cushion. Secondly, help them understand what’s going on to the best of their ability. This doesn’t mean that you have to go show them what the virus looks like or how it’s spread….

Welcome to Kori at Home! I'm a late diagnosed autistic/ADHD mom of an autistic non-speaking daughter and a gifted/HSP daughter. Residing in the capital district of NY, I share my life with my partner Kyle and our three cats.