You are here: Home / Autism and Special Needs / Dealing with Guilt as the Parent of an Autistic Child

The time that immediately follows an autism diagnosis can be some of the most difficult and challenging that a parent may ever have to face.

In a previous post, I addressed dealing with autism and grief.

In this post, I want to address something equally important- autism and guilt. Specifically, guilt as it comes along with being a parent of an autistic child. This was something I struggled with mightily in the beginning and still struggle with from time to time.

After receiving her diagnosis, and wrestling with all of the other emotions that accompanied it, I felt so entirely responsible and guilty for what had happened to B. I’ve learned, over time, how to deal with this. That’s not to say that it’s completely gone, but it’s not nearly as bad as it used to be.

Or at least not most days. 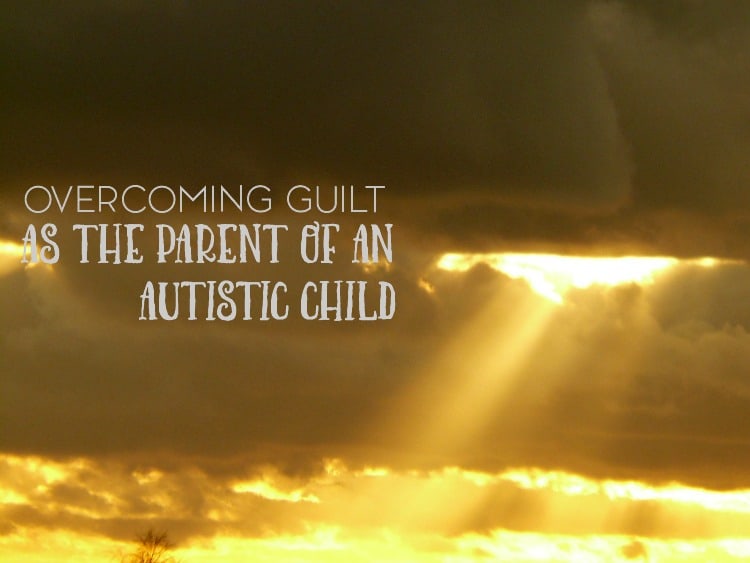 How to Deal with the Self-Guilt of Parenting

To preface, I should give some background information on the apartment that we were living in at the time. It was an older building and the paint was chipping. Even before her formal diagnosis, B always had an issue with Pica (putting non-food items in her mouth) and I believe that she may have eaten quite a few paint chips. Because of this, her lead levels were elevated for quite awhile. Eventually they were under control, but I’m in the firm belief that her elevated lead levels had something to do with the severity of her autism. Or that the lead levels complicated her already complex health issues.

For that, for not being as vigilant when initially looking for an apartment, I felt responsible and guilty.

I also smoked for the first two months of the pregnancy, though not heavily. I’m not absolutely certain that contributed to her prematurity, and who knows, that may have had something to do with her autism. If I had done things differently with my pregnancy, despite going to all my appointments, taking my vitamins, eating healthy, etc.. I still can’t help but wonder. Maybe if I had gone on bed rest so I could have prolonged the pregnancy or if I would have stopped working to lessen the stress.

I question numerous choices that I made during the pregnancy, even though I know I tried to do everything right.

I think, one of the main reasons I felt guilt and personal responsibility for causing her autism or at least contributing to it; there are so many unknown reasons as to what causes autism that I looked for something concrete. Even if that meant blaming myself. If I could at least put some sort of name, some sort of anything to help me cope and deal… even if there’s nothing that I can do about it now.

Until there are more known answers, maybe after genetic testing to rule out other causes, or brain scans; anything that might help me understand. But, at the same time, I’ve had to come to an acceptance.

Over the years, I’ve gotten better with managing my personal guilt regarding my daughter’s autism.

Though, as I said, there are still times where it hits me again. There are no particular triggers, no rhyme or reason, I could just be looking at her or thinking about something that she’s done that day. Or, I could be watching ‘typical’ kids playing and come to the realization that B will never do that or really have those opportunities. Or, I could be watching my youngest reach a milestone or listen to her babble, and the guilt will start to creep in.

So far, Squeaker is developing normally and is hitting all of her milestones when she should be. I’m also watching her development like a hawk, hoping and praying that the same signs and symptoms don’t start showing up.

And for that, I also feel guilty.

At the same time, I’ve also come to some semblance of understanding… and have finally reached a point where I can forgive myself. For reasons that were just beyond my control, my daughter is severely autistic and non-verbal.

That’s just how it is and now I’m okay with that.

One key for me, was accepting her diagnosis for what it is and embracing her strengths. Maybe there’s plenty that B can’t do, but there’s still a lot that she can do. And maybe she can’t talk, but she can communicate.

Focusing on her positives and celebrating the strengths that she does have or the things that she can do have helped my immensely in dealing with my personal guilt. Still, I think that I’ll always feel some sort of responsibility for her autism because she’s my daughter. At least until I can get definitive answers to the root of what caused her autism, that guilt will always stay with me.

As parents, we just want what’s best for our children. I’m not a perfect parent, far from it. And once I was able to come to terms with my guilt and ended my personal blame game, I could focus on being the mom that I needed to be and that B needed me to be. It’s still there, not as strong as it used to be but it is still there. Sometimes I think parental guilt is just one of those things that we face as a parent of an autistic child.

This post was originally published on August 30, 2014 and was one of the first posts published on Just Another Mom. It was updated on February 22, 2016.

This brought tears to my eyes. You’re so strong and it’s so obvious the love you have. Your daughter (and your other kids!) is very lucky to have someone like you as her mommy =)

Thank you so much, that means a lot to me.

It’s always so easy to feel guilty for any issues our children may have. I’m so glad that you were able to e=overcome it so you could fully be there for your daughter.

Yeah, it wasn’t always easy but I knew it was necessary.

I think it’s very brave for you to write about this on your blog and I think you’ve helped so many people who can completely relate to what you’re saying and feeling.

Thank you. It’s still something that I do struggle with from time to time, but it does get easier.

So many people have issues with this and just need to know that it’s nothing they did wrong and now they just need to learn to do things a bit different! 🙂

I definitely think it’s something we all struggle with- whether or not we have a child with special needs. 🙂

Many parents have this feeling but I am glad that you are moving forward in a positive manner.

You are such a strong woman and mom! Your kids are lucky to have you. Everyone makes mistakes or perhaps looks back on something with regret; it’s what you learn from those moments that make you stronger and wiser.

As a mom to 3 preemies, I totally understand the feelings of guilt – wondering what I did wrong, or could have done different. I have replayed every hour and minute leading up to their births over and over and over in my head. Even though I know I did nothing wrong, I still can’t help but wonder. Strength to you and your family as you go through your days.

I think no matter what it is, we find reasons to beat ourselves up. And it’s hard to not feel guilty about stuff sometimes.

Oh yeah, I think it’s just one of those things that comes with being human.

This is a wonderful post and it’s amazing that you are sharing this. There are so many moms out there wrestling with guilt.

I can totally relate. I’m going through guilt right now and it’s a hard feeling to cope with. Thanks for sharing and your such an amazing woman and I’m keeping this blog on my favorite to check back for inspiration when I’m feeling guilty. Thanks for lifting my spirits.

Oh honey guilt is a moms constant companion. Whenever something goes wrong with our precious angels we always feel at fault. Don’t be too hard on yourself! You sound like a wonderful mom and those kids are lucky to have you!

Thank you Maggie, for your kind words- that really means a lot to me!

aww. Parental guilt is very hard to overcome especially if something happened to our children that could in some way be connect to how we did something. It’s good that you have come to forgive yourself. Forgiving yourself for your own guilt will help you become a better parent.

Yes, it was a hard lesson to undergo but a necessary one.

🙂 Absolutely. I needed to be at my best for her sake.

I can imagine that this must be very difficult. Try not to be too hard on yourself. You’re doing the best that you can. As far as putting things in their mouths, it’s so difficult to keep track of little ones. You can’t hover over them 24/7. I’ll never forget my horror when I found a penny in my son’s poop. I felt like the most negligent mother ever, until my other mommy friends shared similar stories and it was like, okay, this job is hard, none of us are perfect, we’re all doing the best we can because we… Read more »

It was a daily struggle for quite some time, though I’ve learned (mostly) to not blame myself. Sometimes I still can’t help but wonder if there’s something I could have done differently.

I recently wrote a post about the very issue of motherhood guilt. I believe if you suffer from it, it is because you care about your daughter. Embrace it and continue to be strong and learn from mistakes. We do what we know.

Did you? I’ll have to read that one, I do enjoy your blog posts, Elayna.

I can see where there would be many different emotions going on. Kudos to you for being brave!

I know every mother has experienced motherhood guilt in some way. When my son was born he was born with a life threatening birth defect and although it wasn’t anything I could do to control it I still blamed myself for it for a while. Thank you for sharing such an honest post! It’s nice to know although it’s different circumstances I can relate to this.