Has it snowed where you are yet? In Albany, we had our first snow of this season the second weekend of October. It was only flurries and didn’t last for very long, but it was just enough to fascinate Squeaker and capture her attention. Of course, she already has a love of snow and snowmen thanks to Frozen (mostly Olaf) but ever since she actually saw snow; that’s all she’s asked for.

However, it has not snowed since but I’m sure it’s on it’s way and will be here before we know it. In the meantime, I put together a sensory snow wonderland for her. Really it was just a sensory snow experiment because I wanted to see what would hold her attention. Next time we do this, I’ll make a bigger batch of sensory snow and let her play with a few animals and cookie cutters. 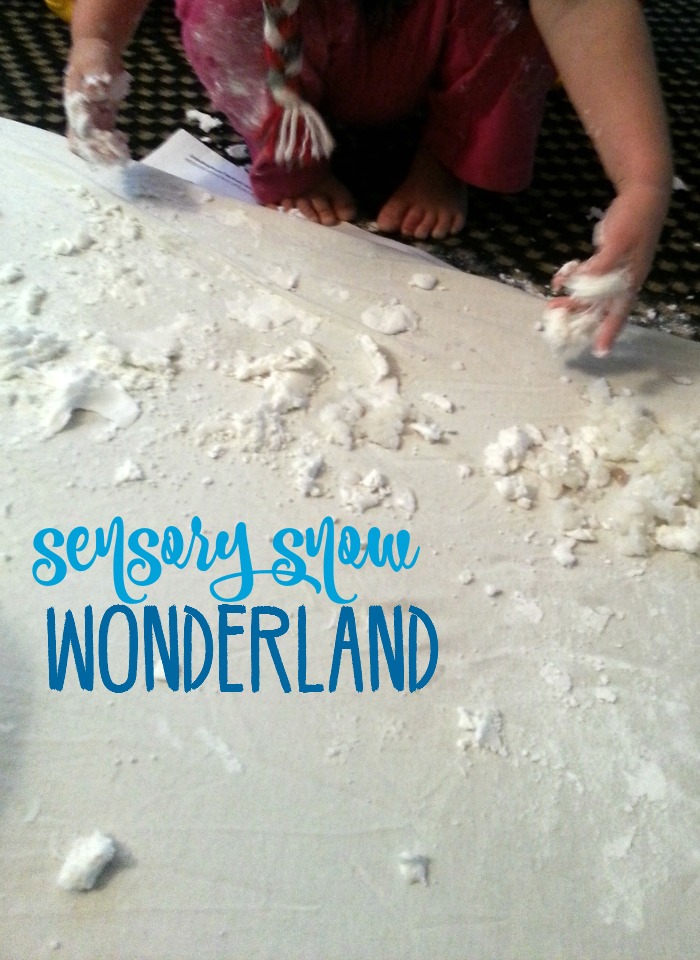 All three variations of this fake snow were easy to make and with Squeaker still in diapers, I had everything that I needed already. For the three types of “snow” we used the following: 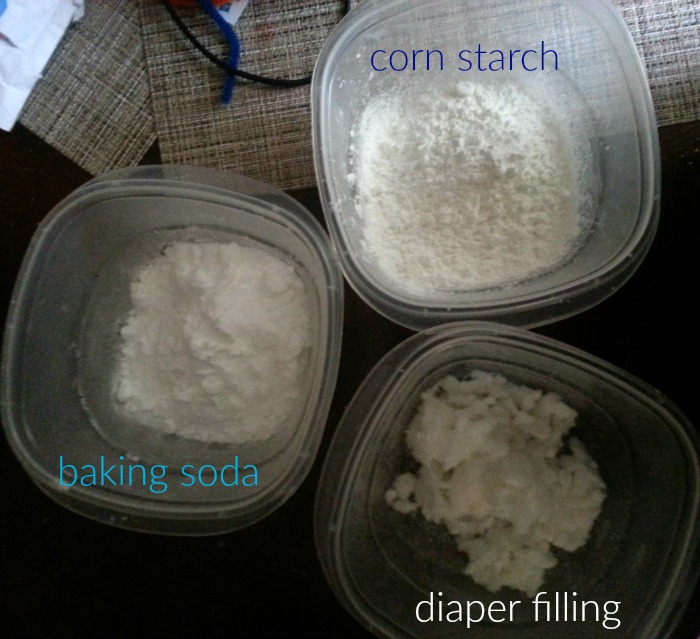 Since we were just doing an initial experiment to see which one she liked best, I didn’t use very large containers to make our snow. And, I’ll be honest, I didn’t measure the baking soda or corn starch. I just poured what I thought was enough into each container.

But, once I had them in there I added the secondary ingredient as needed until the dry/powder ingredient was absorbed. I should have used more shaving cream with the corn starch, lesson learned for next time!

Still, I think they turned out pretty okay: 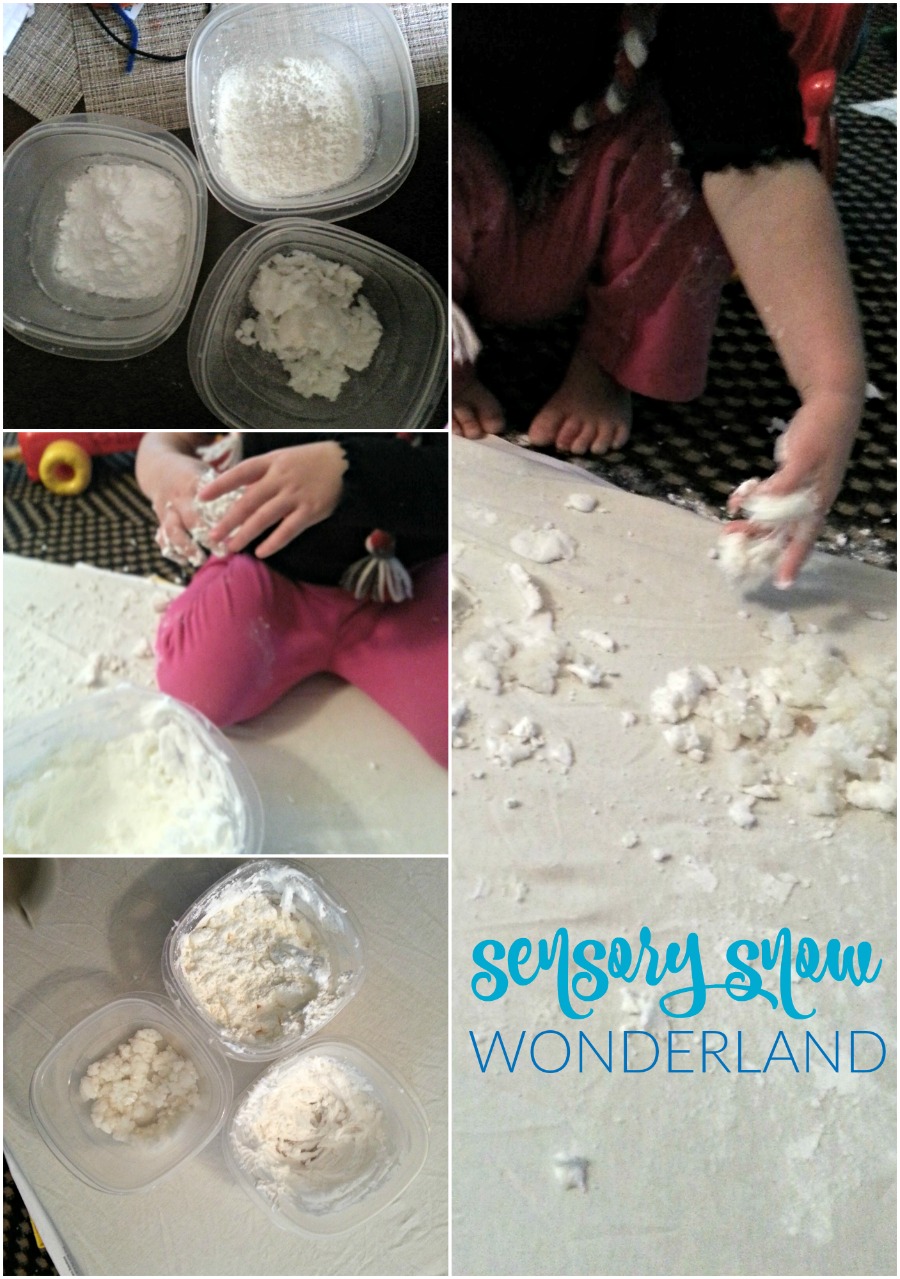 The texture was different for each. And with the baking soda/conditioner mixture I used a lavender vanilla scented conditioner. The smell was actually pretty nice (and coincidentally, this is the one that Squeaker kept going back for).

At first, she was pretty apprehensive about the whole thing: 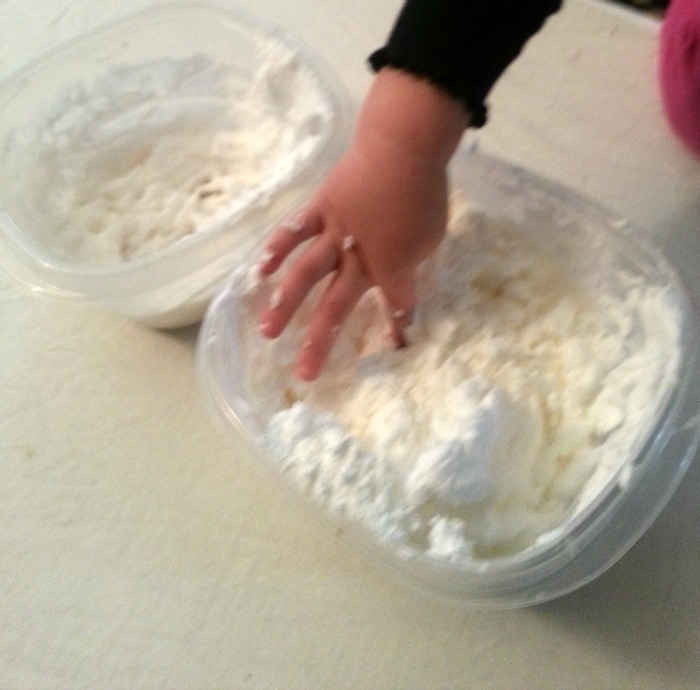 She tried the corn starch and shaving cream mixture first, so I wonder if it was still too powdery and not smooth enough for her. Next time, I’ll mix it better. I think her other issue was that I didn’t roll her sleeves up. She usually takes this as the sign that it’s okay for her to proceed to get messy. 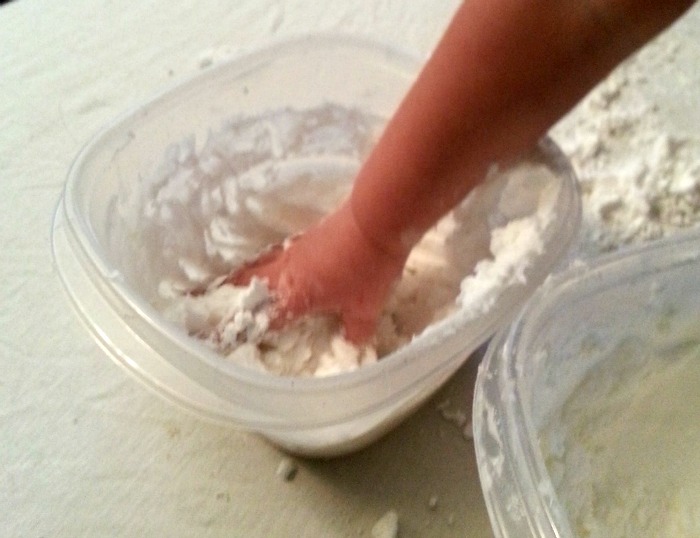 There she is with her hand in the baking soda/conditioner mixture. This one got the most touches and feels as far as sensory exploration. 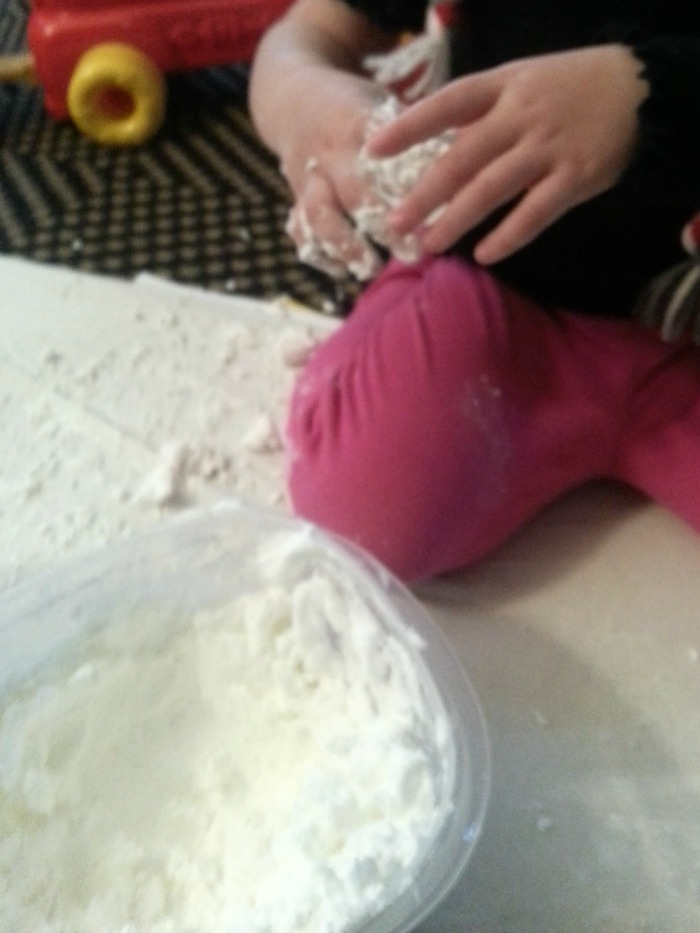 How to set up the Sensory Snow Wonderland Play Area

For her exploration area, I covered a flattened cardboard box with an old crib sheet. Not that there any worries about stains, but it gave her a flat surface to explore on.

Overall, she loved playing with this sensory snow.

Next time, however, I’ll make the following changes:

Maybe I’ll even get in there with her and make a snowman or two.