You are here: Home / Family Life / Handling Mother’s Day as the Other Mother in a Blended Family

Kyle is my other half, as cliche as it sounds, it’s true. Though even that phrase isn’t quite how I would describe our relationship because we’re both complete as people; just that we’re so much more together. I didn’t need him to complete my life, no one should ever need someone to feel complete. That’s something that comes from within, or at least that’s how I’ve always viewed it. Rather, I would say that our relationship has brought the balance, stability, challenge, security… It’s brought so much richness and fulfillment.

And aren’t I just starting to sound like a Hallmark movie opening?

Trust me, that was not my intent since this post has absolutely nothing to do with romance.

This is about being a blended family, being an almost (unofficial) step-mom to two amazing boys, and how I’m handling Mother’s Day as the other mother in their lives. 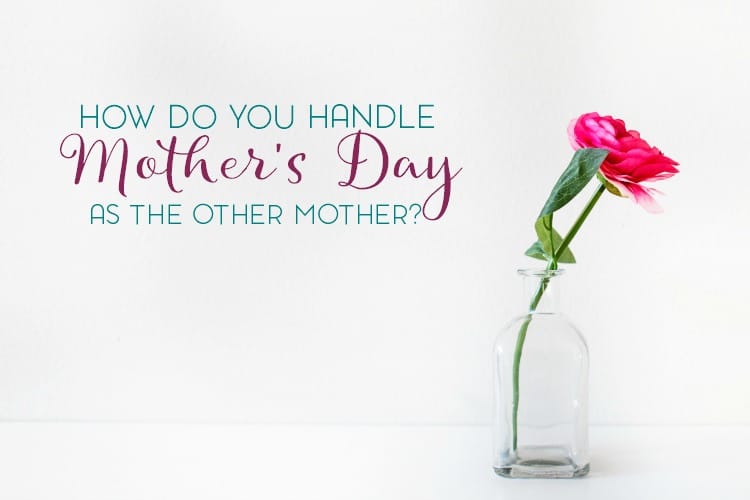 These two crazy, loud, and lovable boys have been in my life now for four years- as of 2017. And here we are now in 2019. We’ve had six amazing years together and we are looking forward to many more.

And at first, there was definitely some adjustment needed but we all survived and I’d like to think that we’re on our way to being one big happy (if not a little crazy) family. We aren’t quite the Brady Bunch, but we’re happy and we have fun. I’ve found common interests with them and we’ve managed to form a pretty good bond.

I even managed to score us a trip to Legoland in Westchester thanks to this blog.

And I’ve gotten them a few other cool things to help review. 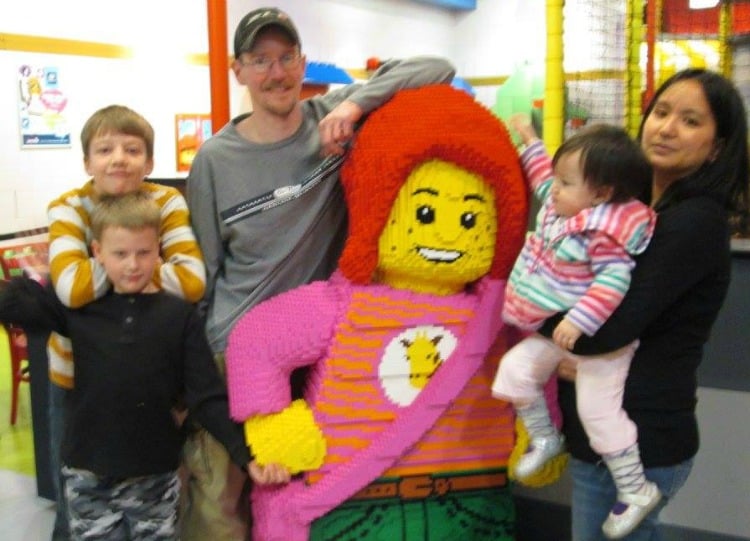 My relationship with their mom is present. It’s stable, it’s steady, and mutually respectful. We’ve established our boundaries and we’ve stuck to them because it’s beneficial to everyone.

The few encounters I’ve had with her have been pleasant enough on the surface. We also have several mutual friends on FB (including a few of Kyle’s family members) and I keep seeing her as a suggested friend, but no. I’m not going to go out of my way to befriend her just as I’m sure she won’t go out of her way to befriend me. I try to tag his family member’s in pictures that include T&J so she can see them. And if she should ever want copies of those pictures, I’m more than happy to send them to her.

But I haven’t sent her a friend’s request and I have no inkling of doing so anytime soon.

My First Official Mother’s Day as the “Other Mother”

In 2014 on Mother’s Day, Kyle didn’t wish me a Happy Mother’s Day until the day was almost over. T & J never mentioned anything.

I wasn’t expecting anything from them. I’m not their mom, I’m not even their step-mom (yet)… to them? I’m their dad’s girlfriend and their little sister’s mom.

I wasn’t even upset that I wasn’t wished a Happy Mother’s Day until later in the day because it’s a day. Okay so it’s meant to be for mom’s and mom’s are supposed to be honored but I’m starting to feel towards Mother’s Day as I do towards Valentine’s Day. One day of the year to show appreciation through gifts? No thanks.

I’m not that type of person and I never really have been.

As I’m beginning my search for adorable crafts and activities to do with the girls (Squeaker in particular), I started to wonder- is it acceptable for me (in the position that I’m in as their almost step-mom) to make a card or do a craft with T & J (my almost step-sons) for their mom?

Would she even appreciate the gesture or would she think I was patronizing her?

I’m sure Kyle would tell me not to bother because my efforts would just be wasted. And maybe it would just be another missed opportunity like the Easter crafts I wanted to do with J.

Or maybe it wouldn’t be a complete waste of time because at least T & J would have fun.. or at least J would because T is a very cool 14 year old who’s probably too old to do crafts.  But maybe he would still help out with a card.

But then, what would happen to these items when they take them home? Would she save them or would she throw them away?

I would want to think, just for wanting to believe the good in people, that she would at least save them. I’m not expecting for her to frame them or display them proudly. I also wouldn’t want her to think that I’m trying to encroach on crafting territory and doing something that she could be doing with them as well.

But because of how the custody arrangement goes, and with Mother’s Day always being on a Sunday; they’re with us for at least part of the day.

And I feel bad because they should be with their mom on Mother’s Day.

I enjoy doing crafts and making cards. I don’t always and sometimes things just get in the way. Or I just don’t like the mess that accompanies it.

So it would be a kindhearted gesture on my part (and also a way to get a guinea pig or two) if I were to make a card and crafts for Mother’s Day with the boys.

But would she see it that way?

I would never expect for her to sit down with the boys to help make me a card for my birthday, let alone Mother’s Day. And she shouldn’t have to. She’s their mom. If anyone is going to reap the fruits of that labor, it should be her.

Still, I would accept the gesture and be appreciative. I would save it because I have a tendency to save almost everything, even when I should let go of it.

But would she do the same? Would the same courtesy be extended to me?

I’d want to think so, but I can’t say for certain.

But would it still be worth it to try?

Absolutely. If only for the fact that I get to bond a little bit with J and maybe T. And I also get to indulge my inner crafter.

In 2015, T&J brought me a potted begonia plant. One of the few that I was able to keep alive all summer and through to the fall. Kyle related to me that it was their maternal grandmother’s idea as they were also purchasing plants for their mom. Again in 2016, I got a potted violet plant. I was incredibly grateful and I think that the boys also remembered my color preferences.

Did they have to include me?

Of course they didn’t. But I’m glad that they did. It feels nice to be included even if I’m not officially their step-mom, I know my place in their lives and would hope that they know their place in mine. They’re just as much a part of my family as my own children.

But would I expect to receive gifts, tokens of affection, gestures or words of love?

It would be wonderful, of course. But until the day comes that it does happen, I’m content with what I have. I’m the other mother in their lives.

Their gift to me is, and always be, that they have accepted me into their life. Whether they get me anything? I really don’t care. 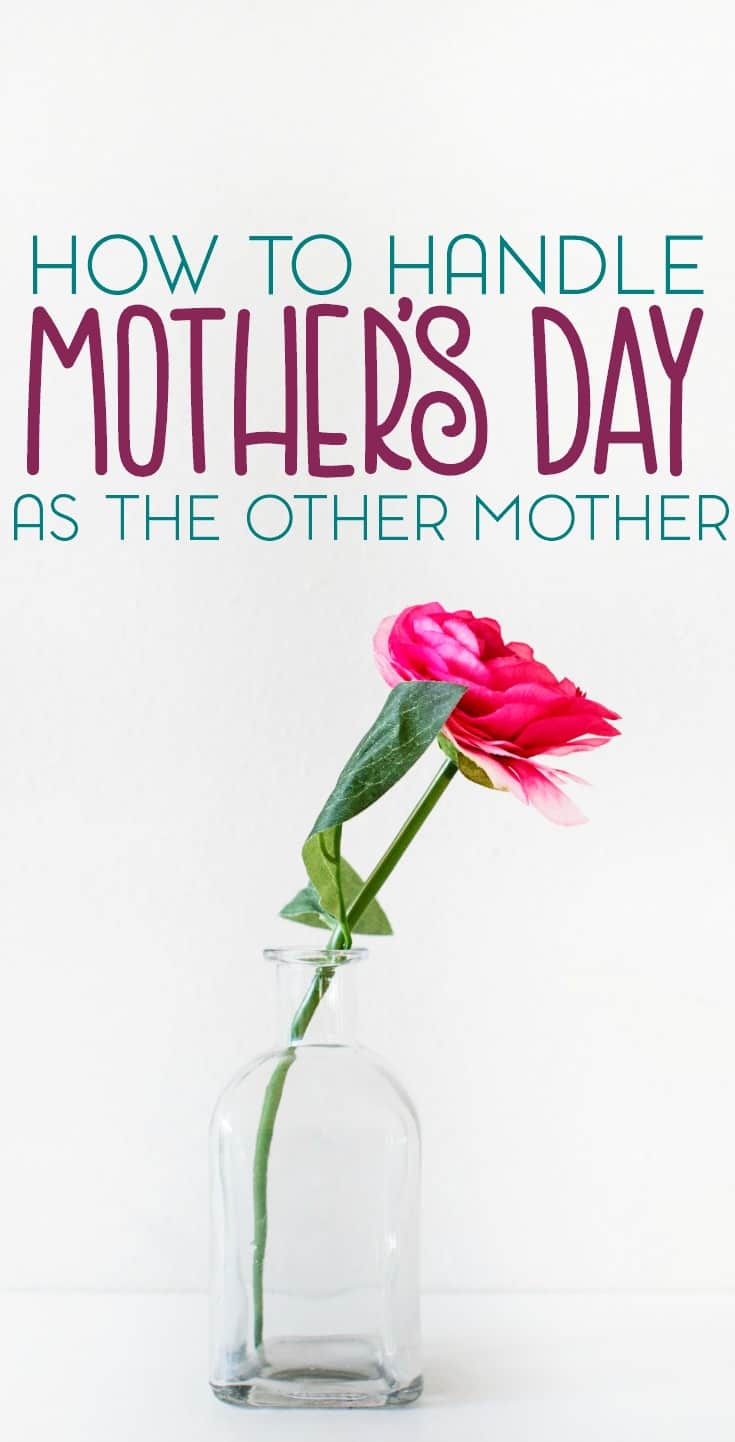 Previous Post: « How to Effectively Discipline Your Toddler Without Yelling
Next Post: Why It’s Okay to Not Feel Guilty About Acknowledging the Stress of Motherhood »

I don’t see why it would be a problem. I would hope that their mom would see that this is about the children and her and not you and her. From what you’ve written, I can’t see why she wouldn’t feel good about a gift from her children.

That’s what I’m hoping for as well, but Kyle doesn’t seem to think so… and he knows her far better than I do. I think I’ll still do it anyway. And hopefully she can see that’s it’s done with good intent.

Coming from a similar situation (my steps are 13 and 15, my son is 3), do what feels right for you. If you think the boys can get something out of the project, than do it! Maybe ask the boys if they would like to make a card/craft for their mom, so your efforts aren’t wasted. I think it shows respect for the boys’ mother to think of her for a special occasion like Mother’s Day, and it might be just the gesture needed to push your relationship in the right direction. Since it sounds like you and her will… Read more »

I definitely think asking them first will be a good thing, then I can at least get a better idea of what they want to do instead of me just trying to force the issue with them.

And yeah, that’s what I’m hoping for but I just can’t be too sure. I suppose though, if anything, it will be a good experience for us (me and the boys) and hopefully go a long way into creating a healthy respect between me and her.

I am a step-daughter of a step-mother whom I haven’t always had the greatest relationship with, that being said, I would say yes. If you can get them to sit down and make a card for their mom with you, or make it a date where they go to the craft store with you and help you pick out some of the materials. If she ends up throwing it out, my mom would have, then her children will notice. Ultimately a blended family can only work with lots and lots of mutual respect and kindness. The other thing I would… Read more »

Thank you so much for your advice, Abbi- I really do appreciate it. I will keep this in mind when we do make our card. We’re hoping to get to a craft store today actually. And I will definitely come check out your linky party and add it to my on-going list!