230shares
I’m not perfect. I have a slew of mental health issues. Most days I can manage. But there was a time in my life that I hit rock bottom.

Depression in special needs moms is more common than you may realize. 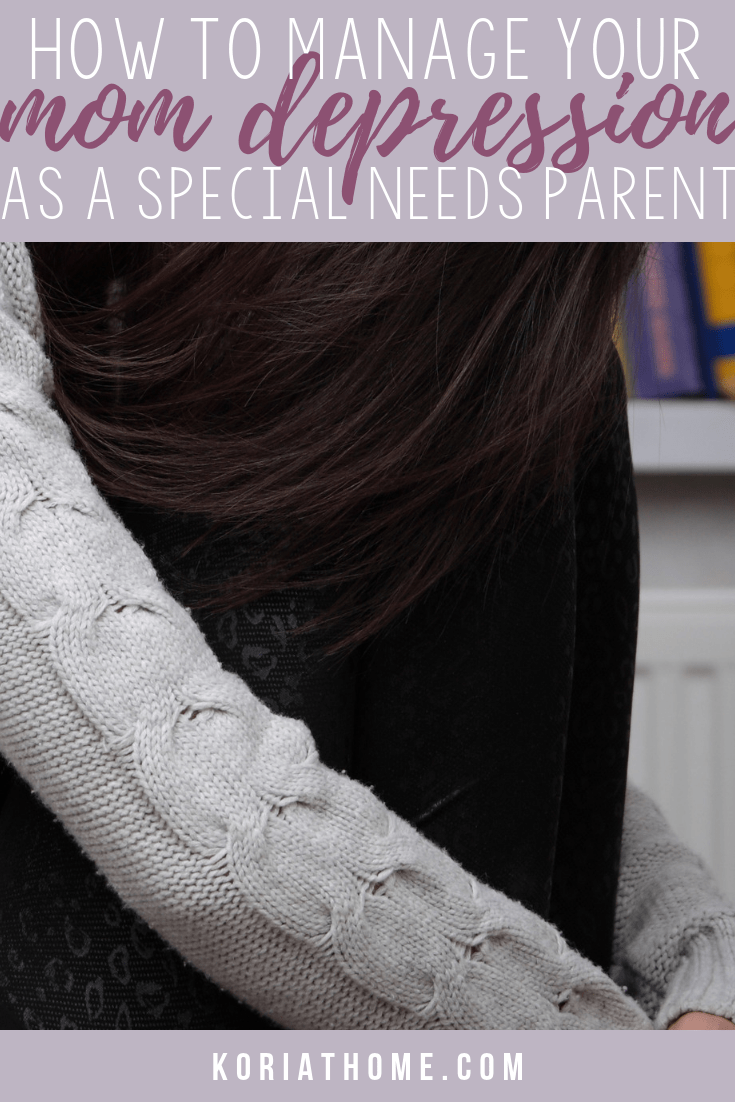 This is my depression story

No he has not passed away.

This is a post that I have been putting off. Not because it was too difficult to talk about but because I wasn’t sure how to approach it. I wasn’t sure if people would relate to it. Am I prepared for judgement? Of course. Whether we admit to it or not, we all judge. I do it all the time. Sometimes more vocally or at least in a more obvious manner.

But then it just occurred to me- this blog is called Kori at Home. I wanted to make it a point to be personal, or at least as much as I’m comfortable with doing. So I want you to get to know me and I want you to know (to an extent) what I do at home. And this post has everything to do with that and then some.

This is about a time in my life that I hit rock bottom. That I wondered when or if there was going to be a silver lining.

I’m a stay at home mom of an autistic child

Let me take this back and set the stage: 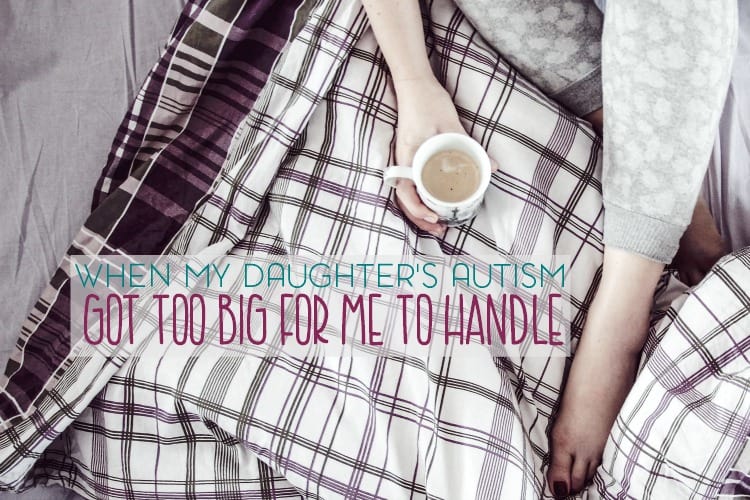 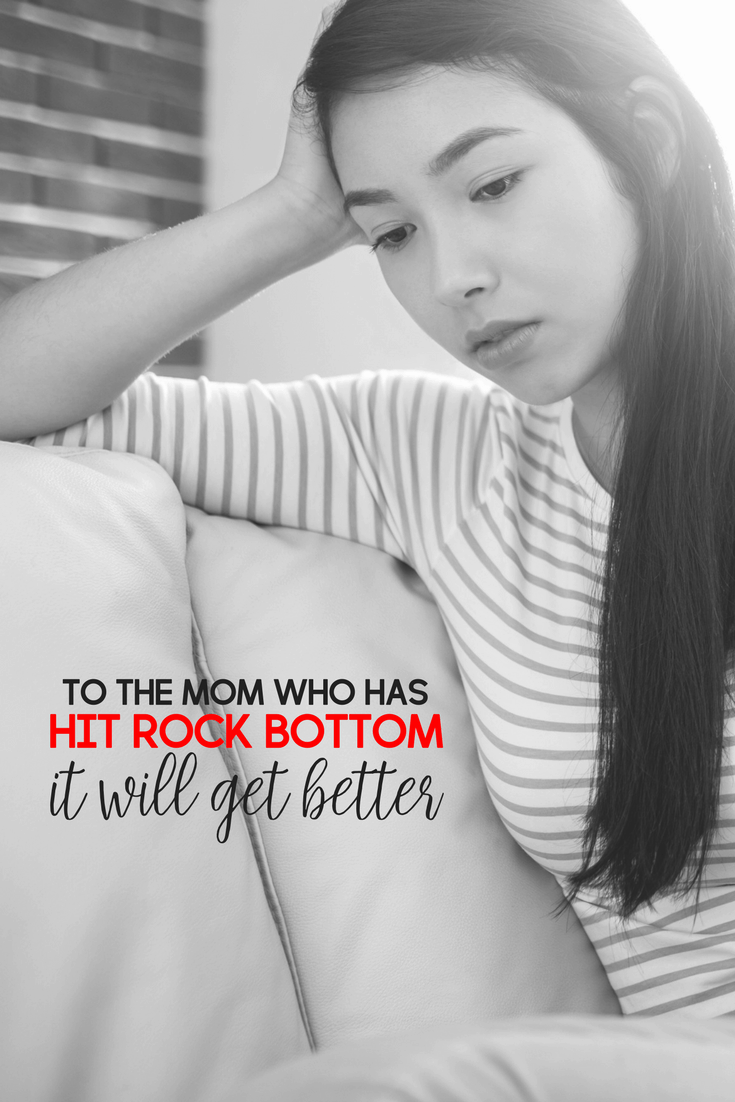 Sweet B was diagnosed with autism in 2003. I’ve said 2004 in the past and now I realize that my math was off and I was going by the best of my memory… which is sketchy sometimes. I’m not perfect, you know? Anyway, according to all of her official paperwork; we got the diagnosis of “exhibiting signs of autism spectrum disorder” in the summer of 2003.

That was when my life changed.

Dashed dreams and hopes aside, along with the overwhelming grief that accompanied the diagnosis; the practical side of me went into action.

And thank goodness that it did.

It was one way I knew how to cope and one way that enabled me to deal with everything else.

Both a blessing and a curse, as I’ve come to realize. A blessing because I have a coping mechanism that’s mostly helpful and useful. A curse because I was ignoring my emotional side and I wasn’t allowing myself the time to feel. At least not fully.

My coping mechanism also, unknowingly, kicked my mental health issues back into high gear- a fact that I was all too willing to ignore while I was wrapped up in looking for answers, treatment options, and alternately cursing every known creature in existence. I was angry at almost everything and everyone- myself being the biggest target.

But that wasn’t helping the situation so I pushed that aside. 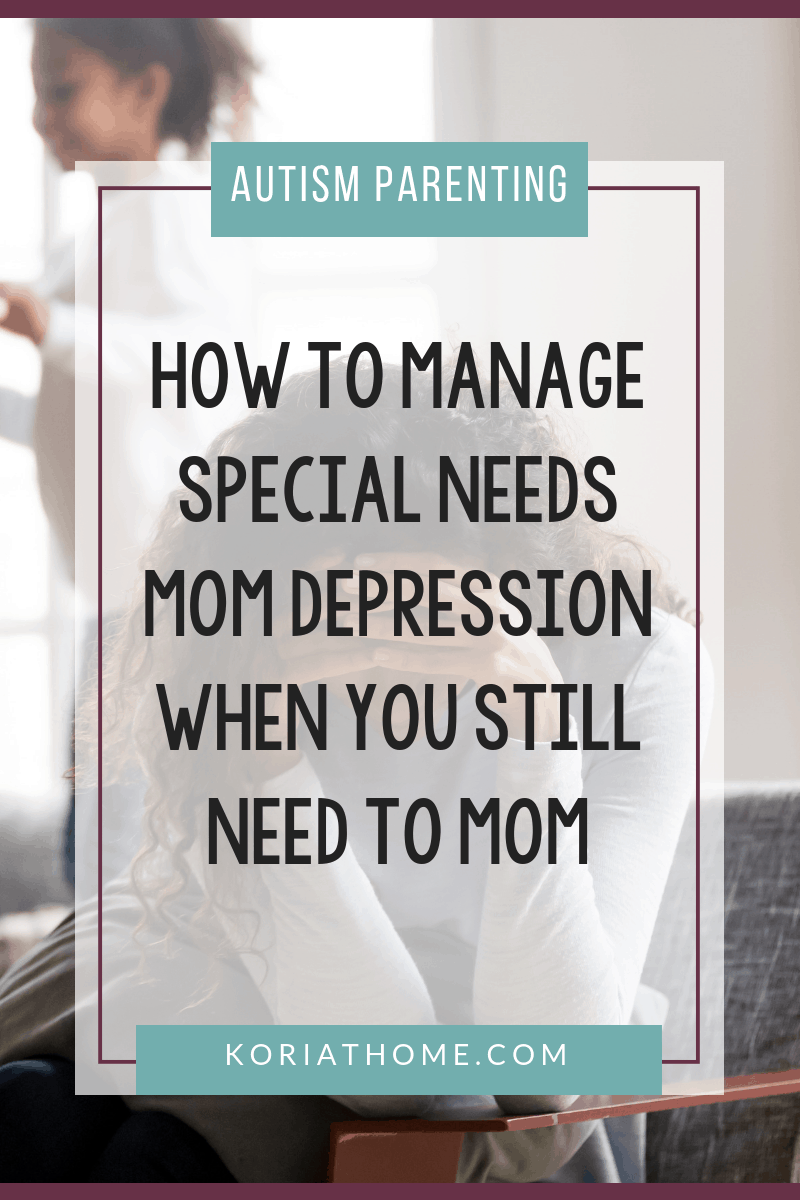 Managing the Day to Day as a Depressed Special Needs Parent

And instead of coping properly, I started to sink back into the depression hole that I had managed to climb out of. Or maybe I had just buried it sufficiently enough.

I went back through the motions of being a “functional human being” – I did just enough to take care of myself. If you call living off of a diet of coffee and cigarettes existing. I could have been the poster child for “hot mess mom” because that’s what I was.

I was not the mom that my kids needed me to be. I was barely a human being.

My kids were being taken care of and provided for, of course. I’m thankful I still knew how to do that. And to be honest with you, it’s probably the only thing that kept me going.

Whatever the case may have been, I wasn’t doing anyone any favors- not myself and especially not my family.

What were you doing when you were 21?

I can speculate or make a few guesses but I won’t know for certain. Just like you wouldn’t have known for certain if you had known me back then. You would have known me as a struggling, stay at home mom of two children under the age of six.

Maybe you would have seen the reality- that I was in over my head. That I was at the end of my proverbial rope.

Maybe you would have known my oldest also had special needs but unless you asked me, you wouldn’t have known the specifics.

That was my life in 2003. I was barely making it, in (almost) complete denial that everything was okay, I was angry with almost everything, my toddler had just been diagnosed with autism.

And I needed help. 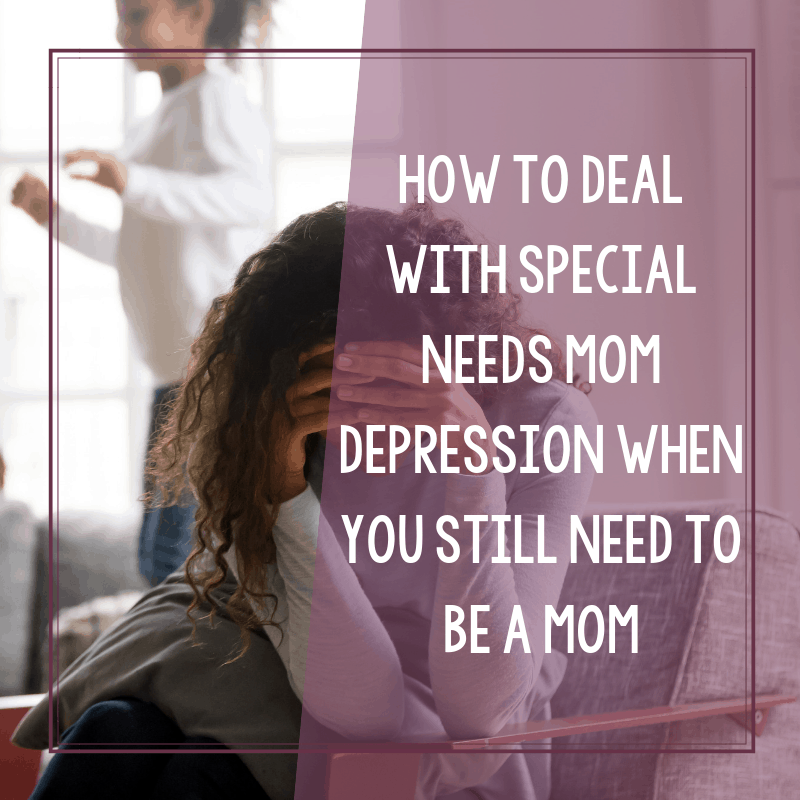 How I Recovered From My Breaking Point

Not just financially or with the housework (which was another thing that went to the wayside), but I needed help being a parent. Sweet B was suddenly taking up so much of my time because of the amount of supervision that she needed.

I was overwhelmed with my daughter’s recent diagnosis and I needed help.

I needed help because I felt like I was completely and utterly failing my son.

I needed help because I had exhausted my own resources and where with all.

I needed help, so much so that I didn’t even know where to start looking.

I needed help beyond recognizing that going back on medication for my depression was a step in the right direction.

I needed help because I was overwhelmed by everything.

Thankfully my mom realized it when I didn’t and thankfully she stepped in and offered to help.

Laurie from Life with a Side of the Unexpected shares signs to look out for: How to Cope with Special Needs Parent Depression 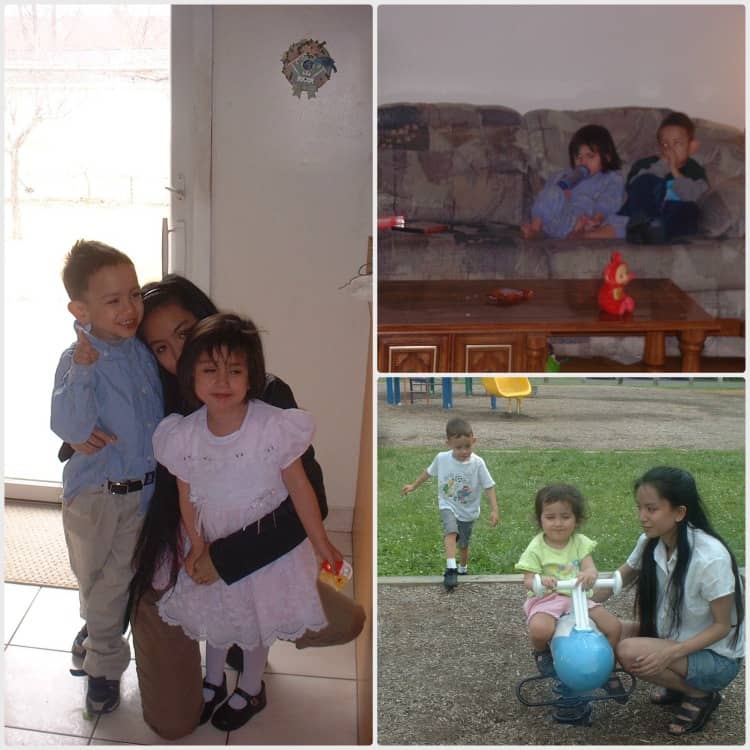 Taking Steps in the Right Direction

For outward appearances, we looked okay- or at least okay enough. The kids were clothed, fed, they had a roof over their heads.

But I knew the harsh truth. I desperately needed help outside of the government assistance we were getting because it was only going to get worse.

And without going into the full back story, I’ll give you the summarized version:

And instead of feeling defeated or feeling like a failure, I felt relief and gratitude.

The situation that I had found myself in was unfair to my son, it was unfair to Sweet B. They both needed me equally and I just could not do it.

I still have a very good, very close relationship with my son and I love him dearly. He knows this.

But it was in the best interest of everyone involved.

I’m thankful that Squeaker came along when she did. Because the age gap (15 years and 12 years) between her and her older siblings is a blessing in disguise.

Granted, some of Sweet B’s needs are similar to Squeaker and there are some areas (if not many) that Squeaker will surpass her older sister.

But having the age gap is a beautiful thing. I’ve matured as a person and as a parent. I’ve learned how to develop coping skills and how to incorporate self-care into my daily routine. Had I not hit rock bottom, I wouldn’t have learned how to climb back out.

I’m able to be there for all of my children- the two at home, and the one who is not. 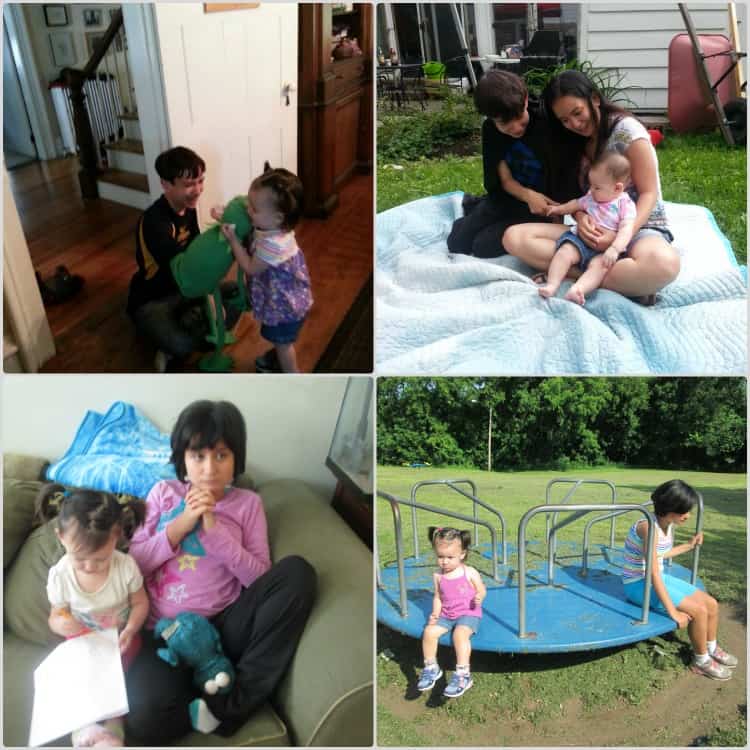 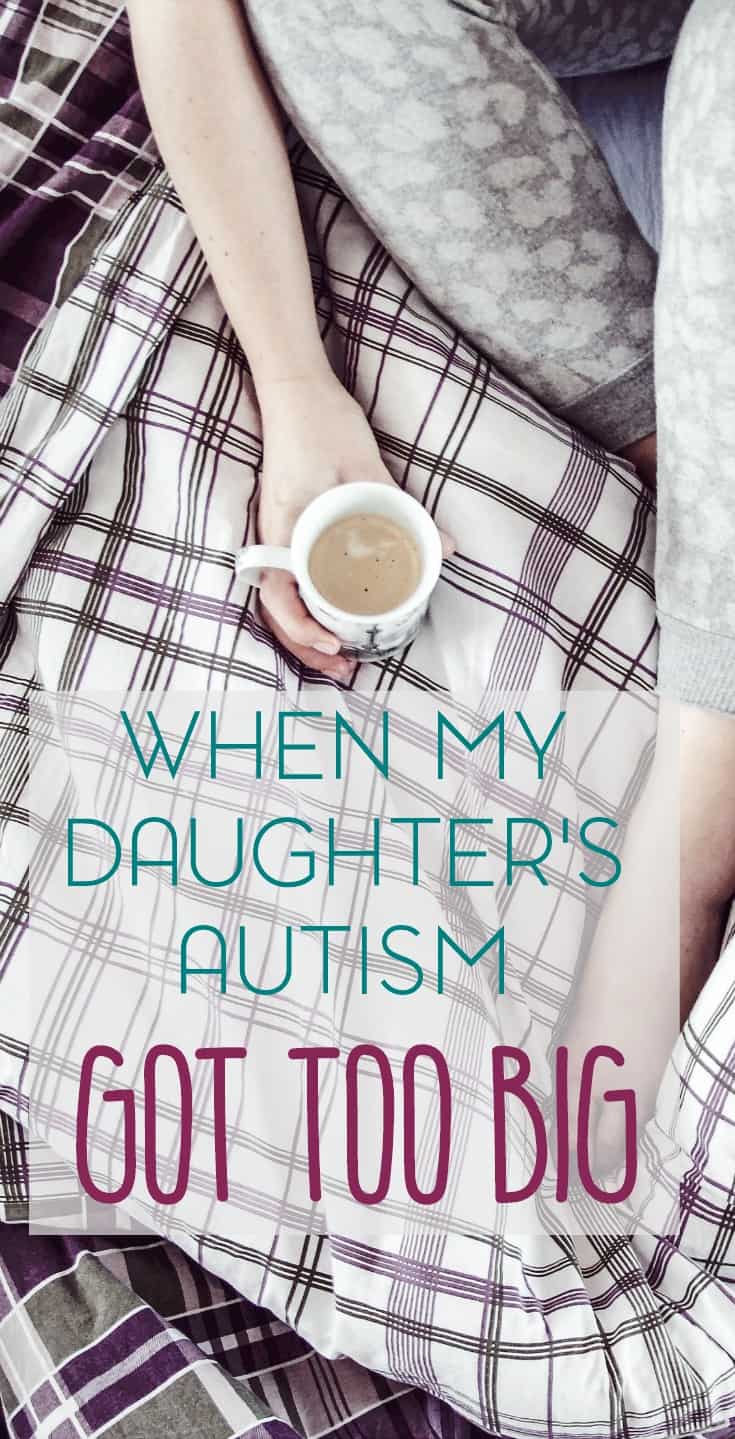 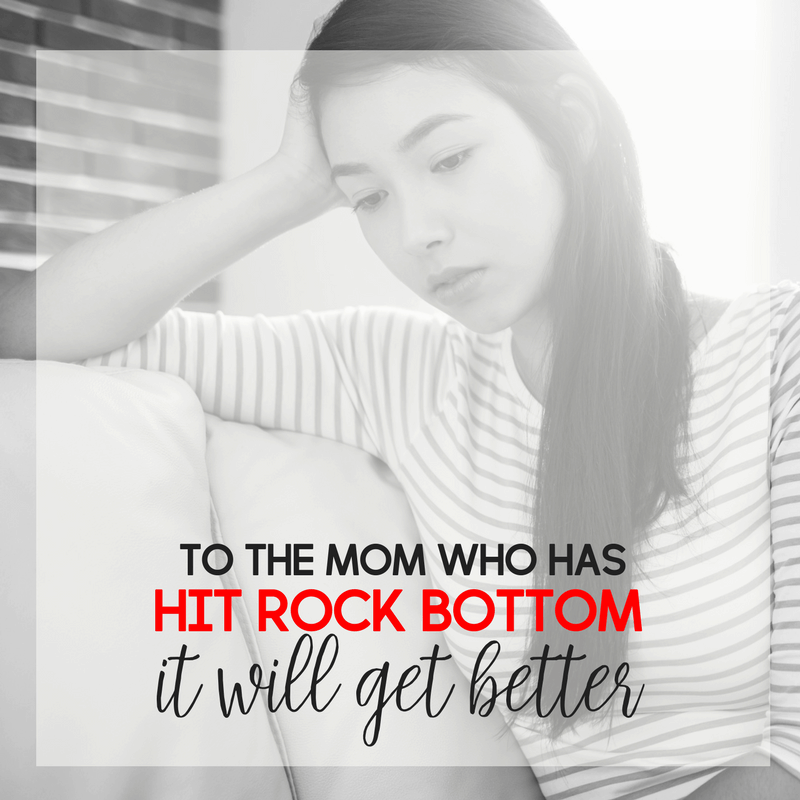 Hello! Thank you for sharing your story! I have a step-son who shows all the signs of autism. My paediatrician confirmed my suspicions but the boys Mom refuses to get him help and says its “labelling him”. Breaks my heart! But, I can somewhat relate to your story because I get extremely overwhelmed with him and my other two kids (7 and 2- my stepson is 9). It’s really hard. So, thank you for sharing because I relate!! And at 21 I was a single mother and broke, watching my friends enjoy college!!! ? C’est la vie!

Thank you so much for this transparent look at your personal history! This post must have taken a lot of courage to write and I, for one, am thankful you did. No judgment here. Only extreme admiration for you and your mother, doing the best for everyone in your family and having the courage to share that story with others who might be struggling with grief, depression, or guilt over a similar situation.

Your story brought tears to my eyes because parenting is so hard in so many ways. Everyone has their own struggles trying to be the best parent they can be and sometimes the best thing we can do for our children is to admit when we can’t do it right then. I am so glad you had the support of your mother…I don’t know where we would be without my parents help over the years as we raise our kids! I admire your openness! I am adopted and know that I was loved enough by my birth mother that she… Read more »

Thank you for sharing. I have 3 kids too, I was also a young mom at 23. My oldest is on the higher end of the autism spectrum, and some days are so very hard. It is hard to keep up with a baby, a toddler, and a child with Aspergers. I truck through it anyway, but there are days when I just feel as if I am pulled apart in different directions.

Absolutely… some days that’s all we can do. It’s getting easier as my toddler gets older. But at the same time, I’m not sure if it’s easier or I’ve just learned how to manage better.

I have 3 special needs and 2 typical children. It can be so overwhelming, but there is also great joy. Thank you for sharing your story. That must have been such a tough decision for you. And what an amazing mom you have!

Seriously this is a beautiful story. You have given me hope about my situation which is alike yours in most ways. It’s very courageous to step out and say that. It shows a lot of courage and strength. Im so happy you are doing better. And you sound like a great mom to all of your children. I’m 22 and have two kids. It’s not easy at that age. And my oldest is on the spectrum. I have terrible coping mechanisms but you have inspired me to keep working through my life and heal. You have also inspired me to… Read more »

Thank you so much for your kind words, Allie <3 And yes, being a young mom can be challenging enough but when you put special needs in as well... well, you know! It is definitely a process but I have confidence that you'll get there. And in the meantime, don't hesitate to reach out. I am an email away and happy to be a listening ear when you need it.