You are here: Home / Autism and Special Needs / Autism Speaks (and Jenny McCarthy) Do Not Speak for Me and My Family

Autism speaks is a bit of a controversy in the autism community. But why is that? And why, are we as parents, not as aware of this? Surely an organization such as autism speaks would act in the best interest of those on the autism spectrum, right? That is what I had believed as well but, I cannot and will not support them. This is why I don’t support autism speaks and I would encourage you to look deeper. Find out the truth and then make a decision. 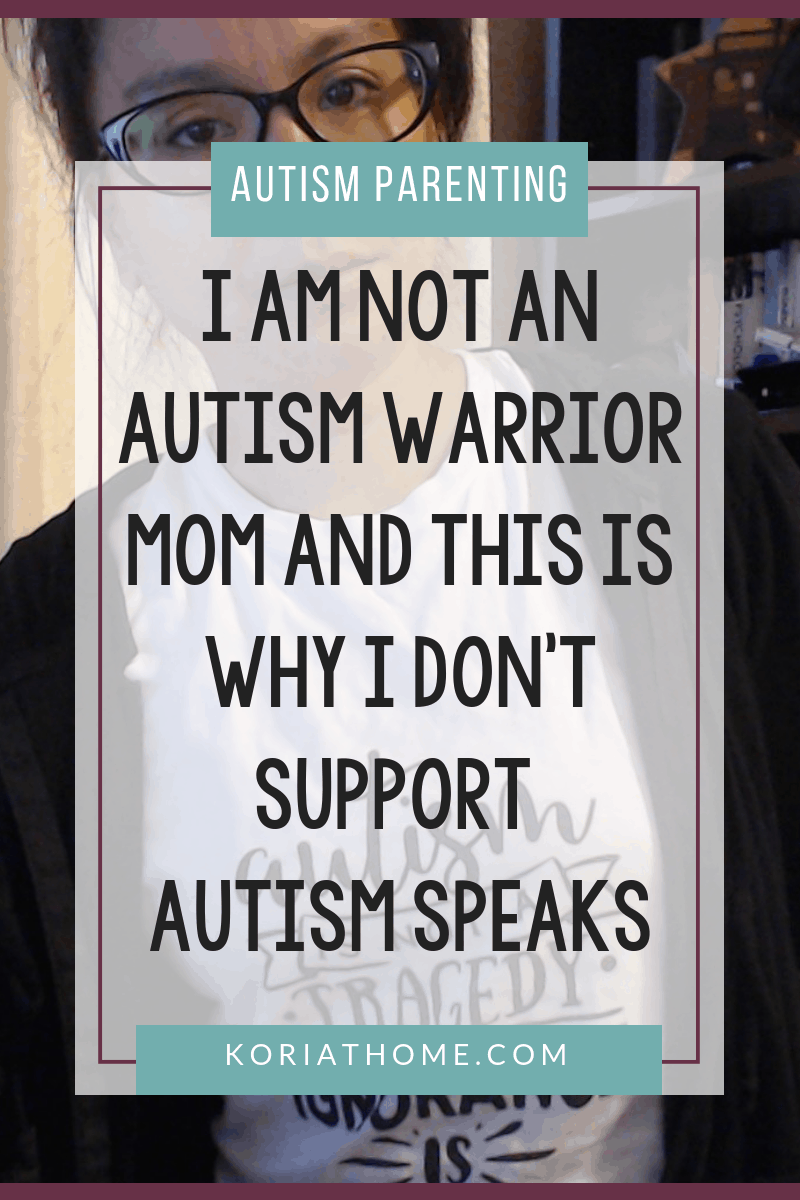 Autism Speaks Doesn’t Speak for Me

April, in the United States, marks the beginning of Autism Awareness month.

However, I would kindly ask you to not include me or my daughter. Rather I would tell you this- autism acceptance does not need a day or a month.

I am not an “autism warrior mom” – kindly do not speak of me as such.

I will very loudly and proudly say it: Autism Speaks and Jenny McCarthy do NOT speak for me and my family.

Though they have since taken the video down, Autism Speaks once ran a campaign where autism was painted in a very bad light. It was suddenly becoming responsible for ruining lives and ruining marriages.

And yes friends, I was one of those people who fell into this harmful mindset. I began to resent autism and all that it represented.

I was an autism warrior mom…

I was drawn in by the light it up blue campaign like a moth to a flame. They had me convinced that autism ruined my life.

Yes, I’ve always been my daughter’s advocate. And I will continue to embrace my role as such. First and foremost, she is still my daughter. So when it comes to that piece, nothing has changed.

I learned, I researched, I got educated about certain organizations. I was already pretty informed about Jenny McCarthy though – and I have quite a bit to say about her as well.

So is there a reason that I don’t support Autism Speaks?

Because, quite frankly, they don’t support autistic individuals so I will not light it up blue. 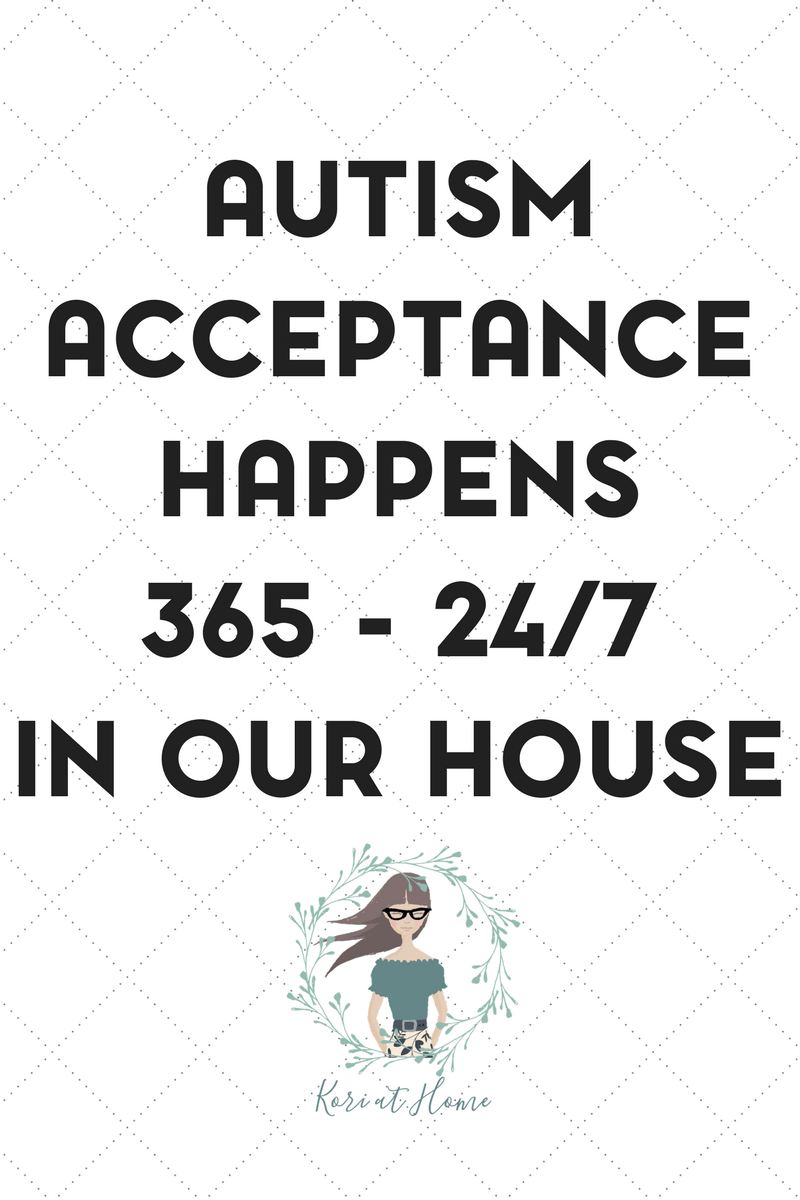 Autism Speaks Does Not Speak for Us

When you take a look at the autism charities, in the United States, there’s a handful that are fairly well known.

I want to address each of them separately but because the focus of this post was originally about autism speaks, we’ll start with them.

If you take a a look at the Charity Navigator website, and search “Autism Speaks”, you’ll see the following information: 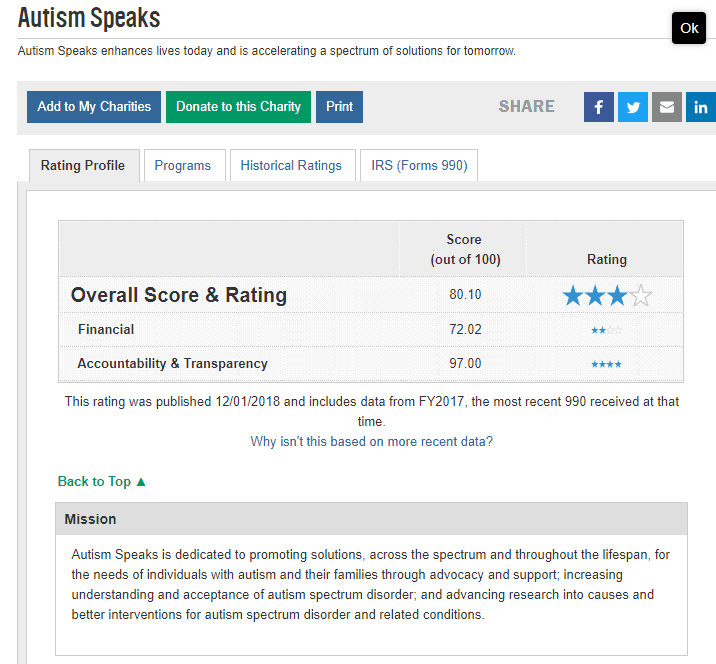 This all seems good on the surface, right? 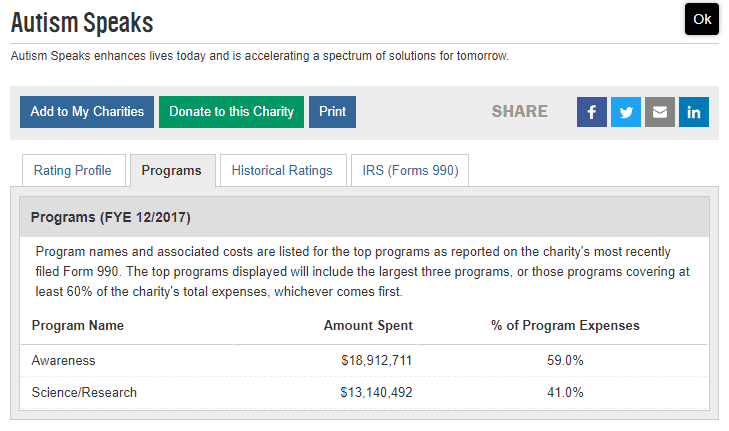 This is where they are supposedly putting the money that they raise.

The concern comes for how much they are actually giving directly to families. I would invite this conversation with a representative from Autism Speaks to truly see where the money goes. Much of the money raised is for the awareness campaigns. Which is fine.

There is nothing wrong with raising awareness but if you aren’t extending your activity to also raising acceptance and helping families? That’s where I also have an issue.

Of the mainstream charity organizations, the Autism Society of America was one that I would donate to in the past.

The main reason I felt more comfortable donating to the Autism Society of America was because of their local presence in the community. They actively organize and sponsor events for families and that was something that I greatly appreciated. 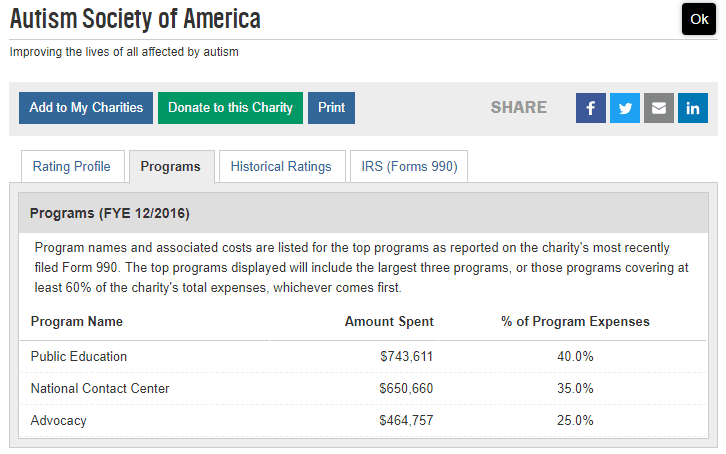 We, as a family, will continue to support some of the work that is being done by the Autism Society. At least in a local capacity.

I’ve mentioned this numerous times on my blog and in this post; I love research. It is one of my happy places and there is a part of me that would blindly support OAR (Organization for Autism Research) quite happily. 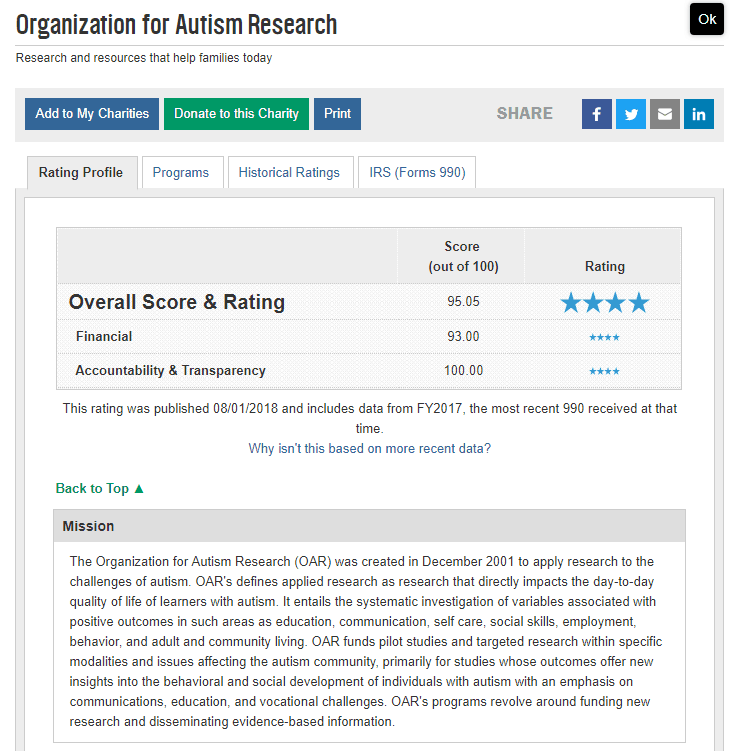 OAR is research based, which makes sense. Research is in the name of their organization and from what I have been able to see on the surface, I like their direction. 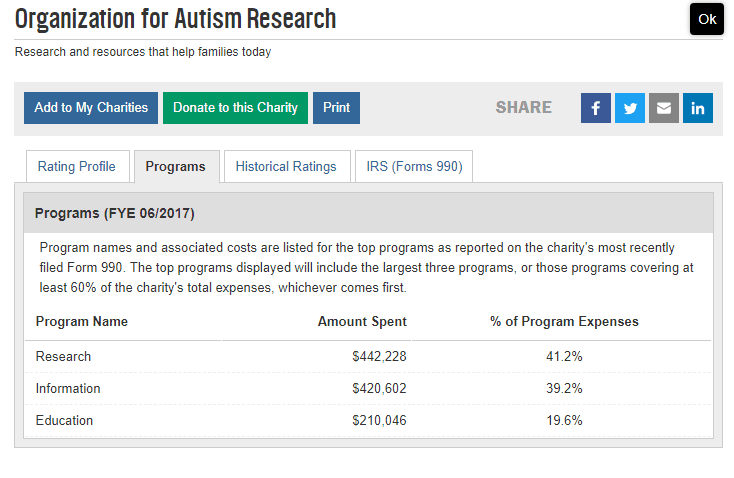 Again, based purely on my love for all things research? I would be inclined to donate to them. Is this a logical and valid reason? No. I would require more insight and research of my own before I can fully make a decision.

So, just as a more favorable bias may have been directed towards OAR, I had an initial negative bias right off the bat because of the name. I am always and have always been in the firm belief that there is no cure. They have, as of 2019, changed their name to The Autism Community in Action. 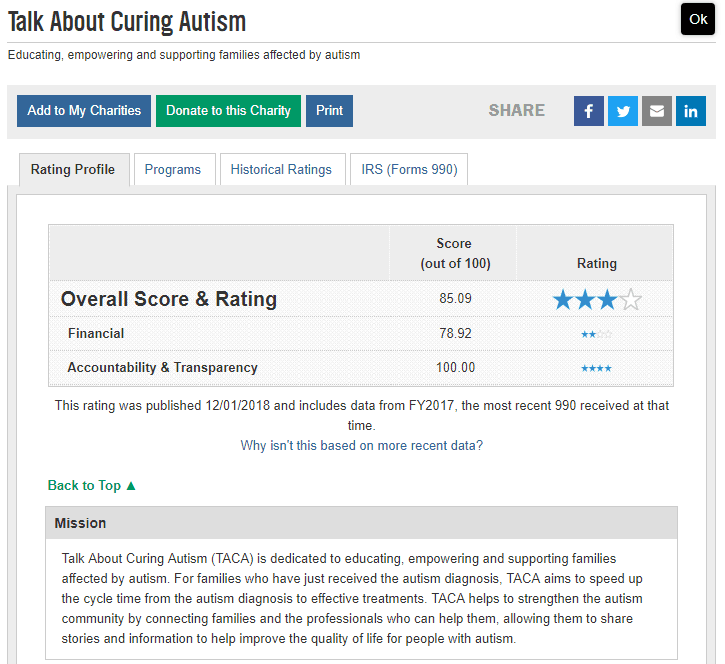 Charity Navigator Rating for The Autism Community in Action

My mission and vision align with theirs and now that they have changed their name? I may feel more comfortable about supporting them. However, I would need to do further and more in-depth research before I can make a decision. 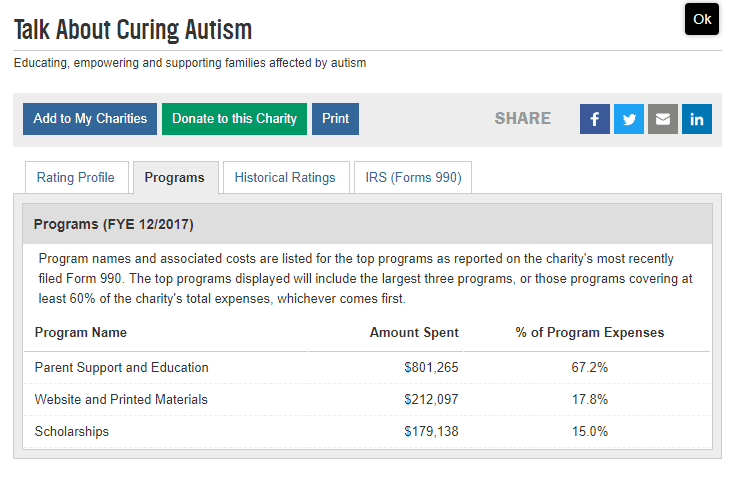 Charity Navigator program overview for The Autism Community in Action

With the majority of the money raised still going towards parents, this organization may be one of those that I would feel comfortable supporting. 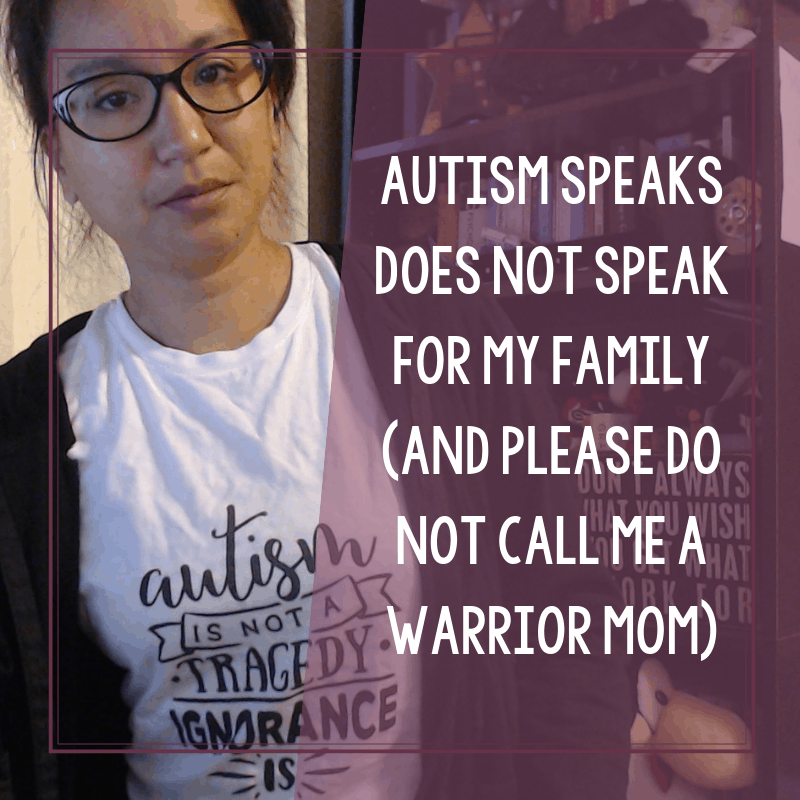 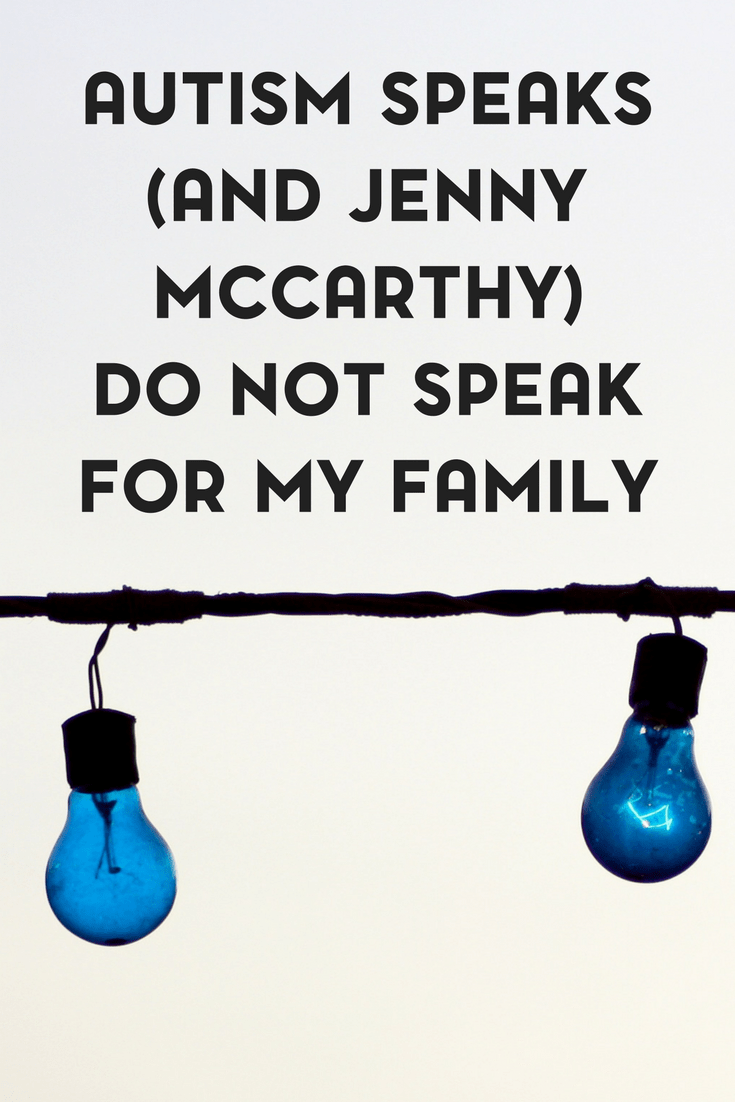 Autism Speaks and their History of Eugenics

Do you know why they ask people to “light it up blue”?

It’s because, for them, blue represents the boys on the spectrum. It is true that yes, autism is diagnosed more often in boys. But what about the girls? I know first hand that there are girls on the autism spectrum. I’m raising one.

Just as non-verbal autistics are seemingly underrepresented when it comes to “Raising awareness” – girls often fly under the radar.  And I was certainly on board with “lighting it up blue” for the month.

Now? Not so much.

Autism speaks is also on my naughty list because they don’t really do much to directly support or assist families. Where is the money going? I haven’t seen a penny, that’s for sure. So when you’re making your donation with the best of intent, I would encourage you to reconsider. Instead, try one of these:

Or, if you’re looking to support a parent, try one of these ten things.

At one point, Autism Speaks was very much supporting and behind the autism-MMR connection.

And, if I told you that autism speaks was funding eugenics? What would you say? As you may imagine, my reaction to that was one of disgust.

I don’t need autism to be eradicated. My daughter is fine the way she is. 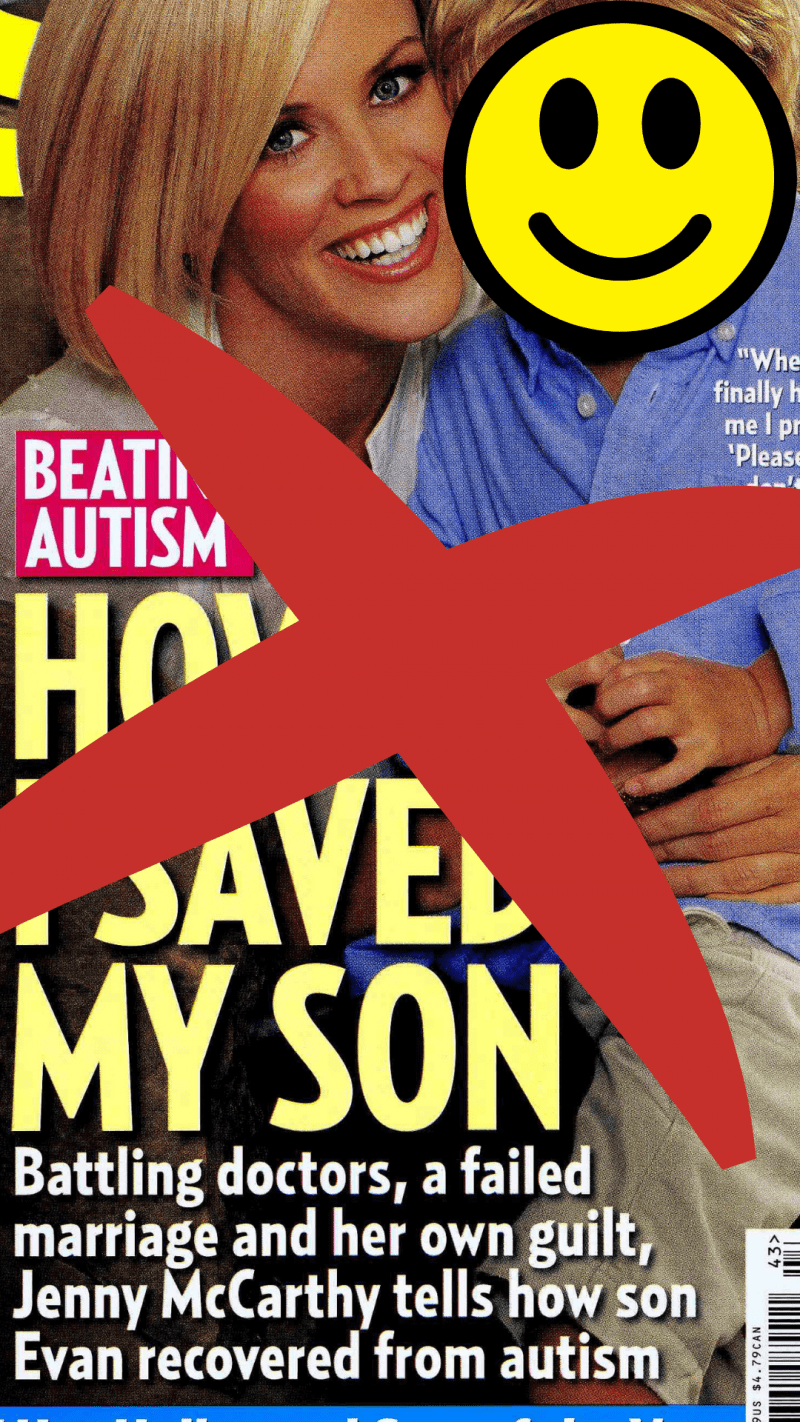 The Harm that Jenny McCarthy Has Done for Autism 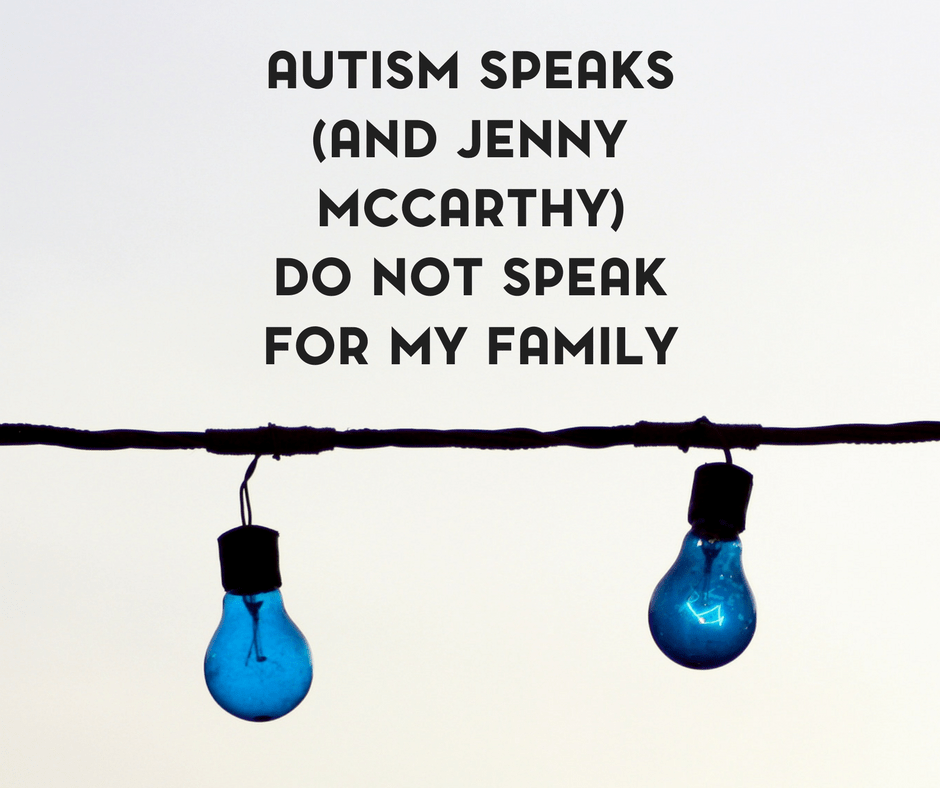 So, that brings me to Jenny McCarthy.

She’s made claims in the past that her autistic son is “cured”  and I am quick to call BS.

Because, by saying that there’s a “cure” for autism- you are implying that autism is a disease.

Autism is a neurological disorder. The exact cause(s) are still unknown but research points to any number of factors. Environmental and genetic being towards the top.

But a disease? No.

Jenny McCarthy was also one of the champions behind the Autism-MMR connection.

The “research” behind this claim has since been proven false- I’m looking at you “Dr. Wakefield”

And yet, there was no issue of any sort of apology for misleading and putting the fear into parents.

There was no sort of remorse or anything similar when it came to those claims. Jenny McCarthy has yet to speak about spreading false information.

And while she could have done so, and has had many opportunities to do so, she has chosen not to.

So I would kindly ask you, because I am not looking for a “cure” – do not call me an autism warrior mom. Do not “light it up blue” for my daughter and do not ask me to spread autism awareness. 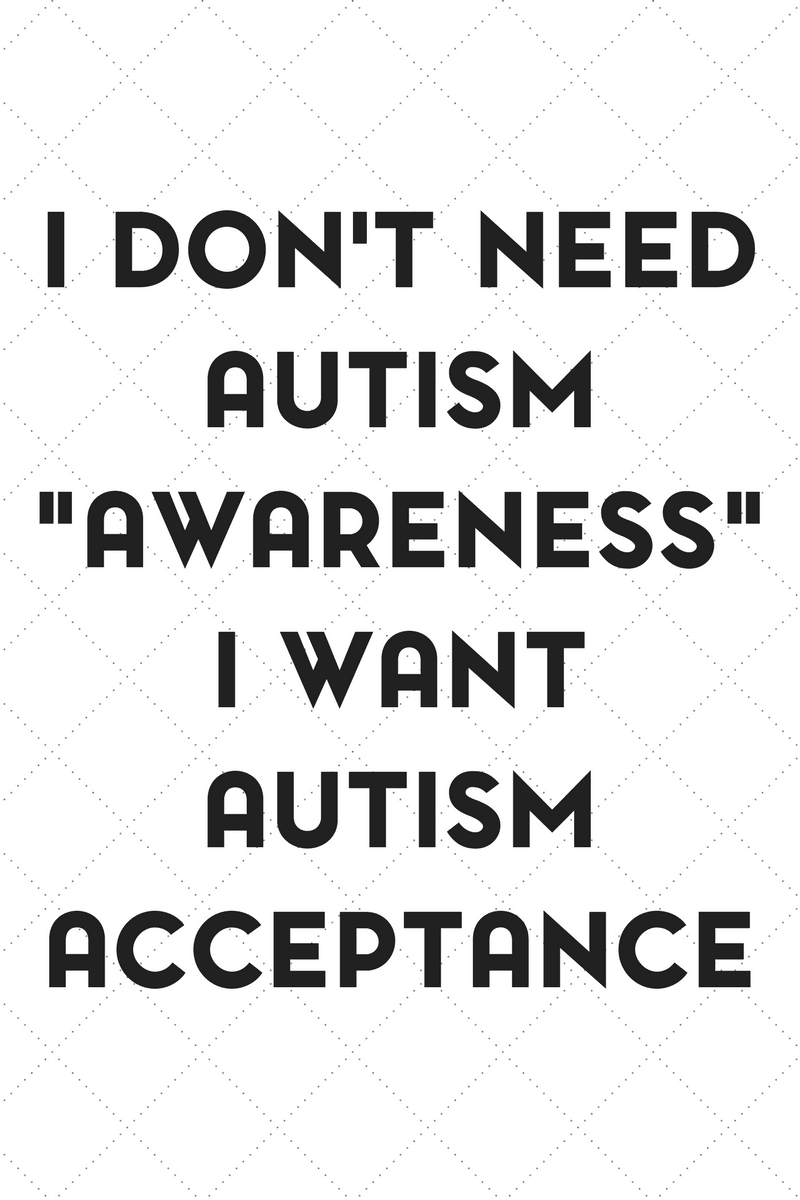 Previous Post: « A Mom’s Guide on How to Take Control Of Your Personal Finances
Next Post: How to Find Your Support Village as an Autism Mom »

[…] why not donate to an autism organization? Why not actually support a local family who has an autistic child? Posting on social media about “awareness” does absolutely nothing to help anyone. […]

Why I Do Not Support Autism Speaks

[…] I just cannot in good conscience support autism speaks as the mother of an autistic child or as an autistic person myself. I know that these aren’t common knowledge facts, but as you […]

[…] Why not actually support a local family who has an autistic child? […]

I don’t donate to Autism Speaks and never will for just the reasons you stated above. I will however be walking 5 miles on April 21st for my grandson’s school. They help him with in so many ways and I know that the money I earn from people that donate to my walk wall will go directly to help him and his school. I totally agree with you. My grandchild doesn’t need to be changed or “cured”. He needs people to accept him for who he is; a sweet, loving, funny little boy who is autistic. He doesn’t need some… Read more »

Yes, absolutely! My daughter’s school holds a walk as well and I am happy to participate in that or to donate directly to her school (And similar organizations). I’m so glad that you are in your grandson’s life!

I am not particularly fond of Autism Speaks or Jenny McCarthy either.

Dear Kori, wonderful article. I loved your insight and the research that you have done on those non-profit organization. Personally, I would highly recommend an organization called KultureCity. https://www.lakikid.com/blogs/special-needs/kulturecity-partnership