So, have I mentioned that I’m a fan of the Walking Dead? I started watching when season 1 first premiered on AMC though, I did lapse and binged watched Season 2 and 3 until I was caught up and ready for Season 4 live on TV.  During my binge watching, I also got Kyle hooked. Not too hard to do since he also likes horror movies and the horror genre. Though we like this more for the survivalist aspect… Anyway, moving. Part of my issue is, The Walking Dead is on Sunday night. Sunday Night Football is also on at this time, and well, as much as I love The Walking Dead… Football still reigns supreme. But, so long as it’s not a team that I am true diehard fan of (The New Orleans Saints), then I am more than okay taking the time to get my fix. Last night, for example, we started out watching football. Then once 8:45 rolled around, it was time to prepare the snacks for The Walking Dead.

I mean, it’s the first episode of the new season- we had to watch it all live, right?

Let this also be your one, and final, warning for spoilers if you have not seen the premiere for Season Six! 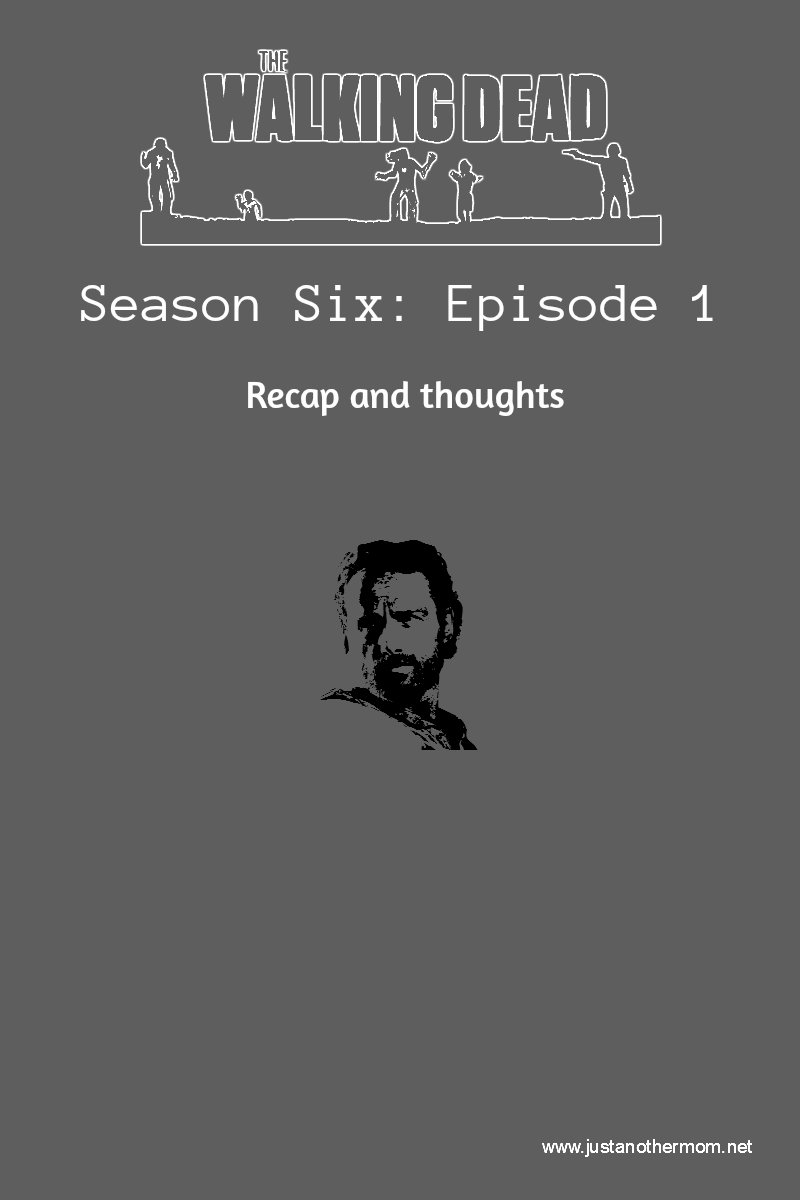 The opening to me, was confusing! Yeah, they explained it all eventually but whoa… horde of walkers out of nowhere. I almost felt as though the opening was a bit too chaotic.

With the way the episode went (present and past), I appreciated that aspect. Sometimes when the new season premieres, and we don’t know exactly how much time has lapsed, we’re left to wonder what’s happened in the lives of our favorite characters. At least with this season premiere there wasn’t much second guessing as we were told (mostly in detail) as to what happened.

So, we start with this big giant hoard of walkers in the gorge. And as the episode moves along, we find out how this horde got there and why Alexandria has been mostly protected and safe from walkers. We also see that Rick still doesn’t have much of a conscious left, which no big surprise there. I’m definitely interested in seeing how Morgan’s presence will affect Rick. And vice versa. As it was mentioned on The Talking Dead, Morgan somewhat represents Rick’s humanity or at least what’s left of it.

As the episode went on, and as things became much clearer, I am compelled to say a few things:

1- There is a Team Badass and they are living together (?) … Morgan, Michonne, and Rick.

2- There is also Team Badass Junior – Glenn, Nick, and Ethan.

Glenn, as Maggie pointed out, likes to help people. And to be quite honest, he’s helped a lot of people. In fact, when Maggie was talking to Tara about what Nick did to Noah… I was thinking, “hey it’s just like when Glenn saved you from the prison.” And then Maggie brings up that very point. I think Nick, under Glenn’s guidance, has a lot of potential. Provided that he doesn’t do something stupid and get killed.

Ethan… I’m still unsure of what I think of him.

Last season, it was clear that Sascha was the one teetering on the edge of insanity…. though, I think all of the major characters have danced on that fine line, if not crossed it every now and then.

This season, it seems as if Abraham will become more front and center. Which, I can’t help but wonder if it’s still leading back to losing his family. Understandable, of course. But if he hasn’t fully dealt with those issues, he’s just a ticking time bomb and it may only be a matter of episodes before something tragic happens.

I could be wrong… I hope I’m wrong.

Let’s get back to that recap though, shall we?

And to that end, I was mildly disappointed that the only closure/resolution that we have with Gabriel was his admitting to Deanna that he was wrong. Okay, so you were wrong… now what? You already knew you were wrong. That’s it? But whatever. I suppose it was just a minor detail in the long run and, at the very least, he did admit that he was wrong.

Rick’s confrontation with Ron (to which Kyle’s first reaction- wait, there’s two of them? As in sons of Pete and Jessie) … well, yeah, he saved him. And yeah, he was trying to do his best (in his own Rick like way) to talk some sense into Ron. But, as Jessie pointed out, Rick really is not in the right place to talk to Ron. And sure, maybe Rick did change his mind about burying Pete’s body but I had to think that there was an ulterior motive going on there as well (… Jessie).

With the episode ending the way it did, I’m left to wonder…. and Kyle and I both had a few thoughts:

2- Is it Deanna gone over the deep end?

3- Did something happen to Rosita?

4- Perhaps something happened to Sascha and Abraham?

Of course we’ll find out next Sunday.

This episode wasn’t as intense as I thought it would be. Yes, it had it’s moments. Yes, it was still intense. But not quite as intense as I had hoped. Did it meet my expectations? Overall, yes.

Did it answer all of my burning questions? No.

Did I get my closure from the end of Season 5? Overall, yes.

Sorry, but not sorry, to see you go: Carter

What do you think about the episode?