Well, maybe not everyone loves a parade, but I know I love watching them on television. Watching the Macy’s Thanksgiving Day parade is a tradition for me- I always have my breakfast while I’m watching the parade and also keep the tv on while I start whatever cooking I need to do for the day. From the time I was a child, watching in my pajamas, to now- I can’t think of a Thanksgiving without the parade. So when I had the opportunity to interview one of the lead balloon designers, John Piper, I couldn’t possibly let that pass me by! I have the full audio of the interview and I’m so happy to be able to share that with you. Speaking with John was such a treat. After speaking with him, watching the parade in a week will take on a whole new meaning for me.

The 88thAnnual Macy’s Thanksgiving Day Parade®hits the streets of New York City. On Thursday, November 27that 9:00 AM, more than 8,000 participants, some donning clown costumes, handling balloon giants or striking up the band will set down the streets of Manhattan at the sound of the time honored catchphrase Let’s Have a Parade™. With a live audience, more than 3.5 million strong and a nationwide television gathering of more than 50 million viewers, the Macy’s Thanksgiving Day Parade is the nation’s most beloved holiday pageant.
From its humble beginnings in 1924 to the breathtaking spectacular of today, the Macy’s Parade line-up unfolds each year in grand fashion. It’s not just a Parade marching down an avenue; it is a march through tradition, history and popular culture. The magic Parade’s famed line-up this year features 16 giant character balloons; 33 novelty/ornament balloons, balloonicles, balloonheads and trycaloons; 27 floats; 1,300 cheerleaders and dancers; 1000 clowns; 12 marching bands; and a host of celebrityperformers. 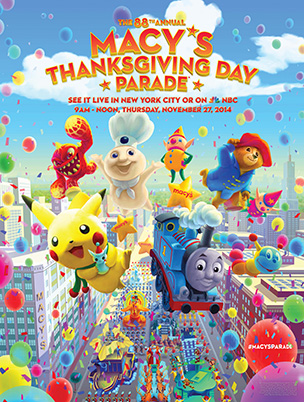 First, did you know that one of the six new balloons in this year’s parade is Thomas the Tank Engine? That’s right! But this took awhile because of the development in technology. In fact, let’s take a look: 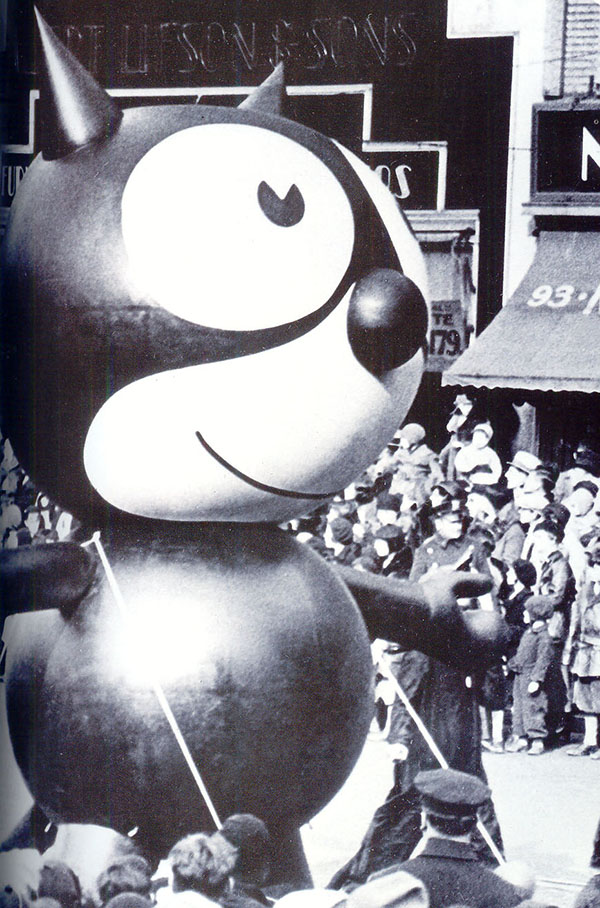 The first balloon in the 1927 parade- Felix the Cat

The balloons have really come a long way since then. In fact, I asked John about the balloons and specifically about Spongebob, since he isn’t a typical round shaped balloon. As you’ll hear in the interview, John confirmed that Spongebob was a predecessor in terms of technology for getting Thomas the Tank Engine in the parade. 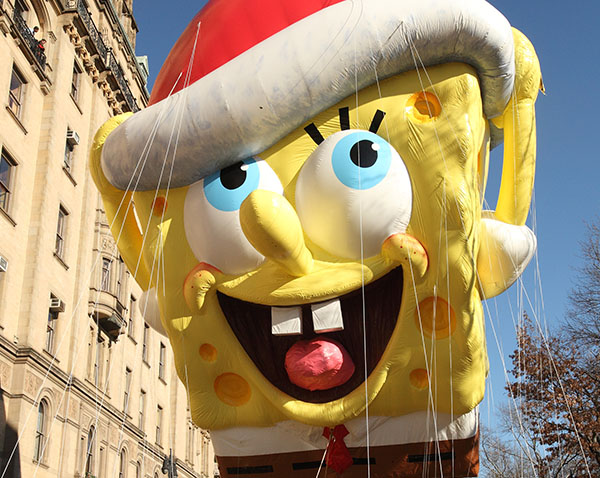 Who lives in a pineapple under the sea?

And, I’ll admit, I’m not a huge fan of Spongebob but that tune is catchy… 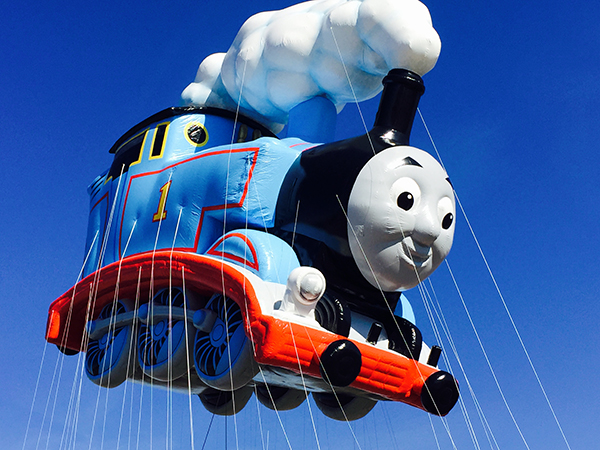 Here are some information about Thomas, courtesy of Macy’s:

Thomas the Tank Engine, the beloved #1 blue engine from the popular Thomas & Friends™ animated series, makes his Macy’s Parade debut this Thanksgiving! A child’s first best friend, Thomas takes flight in celebration of 70 years of friendship, adventure and imagination with kids all over the world.
Balloon Dimensions: 51-feet long, 23-feet wide and 47-feet tall
Fun Fact: Thomas is the Parade’s largest balloon by helium volume and the high flying creation that contains the most balloon fabric ever used to design one character
Another new character that we talked about was Paddington Bear 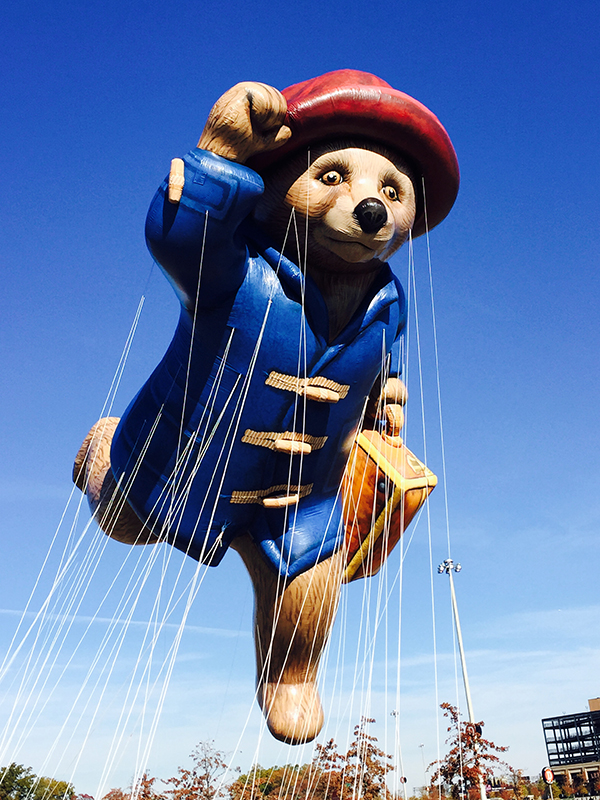 And here’s some information about Paddington from Macy’s

From Peru to London’s Paddington Station and now New York City, Paddington makes his debut as a new giant balloon ahead of his starring role in The Weinstein Company’s PADDINGTON, early next year.
Balloon Dimensions: 54-feet long, 36-feet wide, 60-feet tall
Fun Fact: Paddington’s trademark suitcase is the size of a typical 2-door garage
For more information about the Thomas the Tank Engine balloon and about John Piper, make sure you watch the video interview below:
Want to see more? Did you know that you can actually watch the inflating of the balloons for the Macy’s Thanksgiving Day Parade? If you’re in or are going to be in the New York City area, inflation begins at 3:00 p.m. on Wednesday, November 26th at 77th St. and 81st St. between Central Park West and Columbus Avenue.
* Some information and all images are copyright to Macy’s and used with permission for this post.
The following two tabs change content below.

I’ll be there for the first time and yes, I will be watching the balloon inflation, too!!

That’s so awesome! I’m sure you’ll have a great time.

I love the Macy’s Thanksgiving Day Parade and it is something that I have watched since I was a kid which was a VERY long time ago! The best memories are of me and my son watching them (my daughter would never sit still long enough). This year we will be watching together again for the first time in 6 years (he’s a Marine and hasn’t made it home for Thanksgiving in years)!!!! I am so excited. I would love to see them inflated like that. My dream would be to see it live one day

This is an AWESOME post! I’ve been a huge Macy’s Thanksgiving Day Parade since I was a kid.

Me too 🙂 I love watching this with my kids now.

I know I definitely love parades! I would love to see the Macy’s Thanksgiving Day parade in person sometime.

It’s a goal of mine to eventually see it in person… if I can handle the crowds.

I had to drive into NYC today to a client and they are already warning people that avenues and streets will be closed!! I have never seen this parade in person preferring to watch it on TV-I am not a fan of crowds. It does amaze me how far it has evolved since I first saw it!

Yeah, it almost shuts down the city for awhile or at least parts of it.

Ahhhhh I love the Macy’s parade!!! So excited my princess is old enough this year to actually know what’s going on!

The balloons were far and way my favorite part as a child. Oh how I loved them!

Mine too! I love seeing the floats too.

I remember growing up watching the huge parade on TV. I would love to go and see it all in person.

I haven’t seen a parade in a long time. Your post brought back some good memories for me! Thanks for sharing!

I’m a parade junkie, I love watching them

It has been a Thanksgiving tradition since I was a little girl to go see the Macy’s Day parade. Then as travels and life moved me from the area, I carried the tradition on with my little ones watching it on TV. This year we will be watching it online 😀

It’s always been a part of my Thanksgiving

I love watching the Macy’s parade every year. It is one of my favorite traditions.

Mine too, for sure.

I LOVE parades 🙂 Especially the Thanksgiving one! I used to march in them with my HS marching band as a flag girl 🙂

I love watching this on tv. The crowds would be a bit much for me in person, though!

I have been to a Parade once, it was a wonderful and joyful experience for me and my family. All pics looking amazing and I am sure you had a good fun. Thanks

Yeah, they can definitely be a lot of fun

I have always loved to watch the parade on TV. It would be neat to go to the parade in person, but I don’t think I could handle the crowd.

Yeah, that would be one of my main concerns.

Oh how id love to see this in person. I love watching it on tv ever since i was little.

The only parades I’ve been to were school parades when I was in middle school. However, it would be fun to go to a Macy’s Thanksgiving Parade someday!

Very cool to see Paddington. We watch this parade every year. My son got a kick out of it!

I would really love to see this parade in person. I have always watched it on tv.

Yeah, me too. It looks like it would be a lot of fun.

This was something I always did as a kid and i’m planning on taking my kids this year and every year. I love them

Wow, that’s nuts! That Paddington’s suitcase is the size of a 2-door garage?! That really puts it into perspective. Never seeing it in person, I guess makes it more difficult to fully grasp how large those floats really are! I watch it on TV every single year though. Love the Macy’s Day Parade!!!

Yeah, it’s kind of mind boggling when you realize what goes into those things.

I think they are fun. I remember going when I was a kid and sitting on the sidewalk. It’s just a great experience.

Yeah, I haven’t been to the big parade in NYC, but I would love to go one of these years.

Aww I love all the characters featured in this parade. My little guy would love to see it.

Me too, I think I get just as excited as the kids do for some of them.

Thomas the Tank? My little guy is going to be SO excited! We love the parade!

I love the Macy’s parade and I love Felix the cat since Felix is my last name. I even have a tattoo of Felix the Cat on my arm! ^_^

I cant wait for the Macy’s Parade! Everyone loves the NYC street parade..I mean, it’s a tradition at this point! I love it, and now I’m pumped for the holidays. WOO HOO!

Yeah, for me it really does set the mood for the holidays.

I have always wanted to go to a big parade in person. I would love to see all the big balloon characters.

I miss going and seeing parades. I will have to watch some this year.

Saw the parade on TV, first time actually. It was entertaining, especially when Kiss showed up! 🙂 I am not a fan of rock music and neither of their band but I love it. 🙂